A plastic recycling factory fire at Kronum-Afrancho in the Afigya Kwabre South District of the Ashanti region has claimed the life of an 18-year-old student.

In an effort to use a fire extinguisher to stop the blaze from spreading, Stephen Agyekum perished.

He couldn't get out of the blazing structure because of the intense heat, wind, and smoke.

Stephen Agyekum, the deceased, attended Adugyama Senior High School and was a form one student.

Joshua Asiedu Boafo Junior, one of his friends, claims that they were successful in removing a gas cylinder from the kitchen to prevent an explosion.

However, their view of the door was obscured by the fire's dense, black smoke.

Joshua was able to escape the room by crawling, but Stephen, a buddy of his, was stuck.

Several locals made vain attempts to save him.

The fire claimed Stephen after he became trapped.

A plastic recycling facility was destroyed by the fire, which then spread to five nearby homes.

The factory building and the owner's dwelling were completely destroyed by fire. 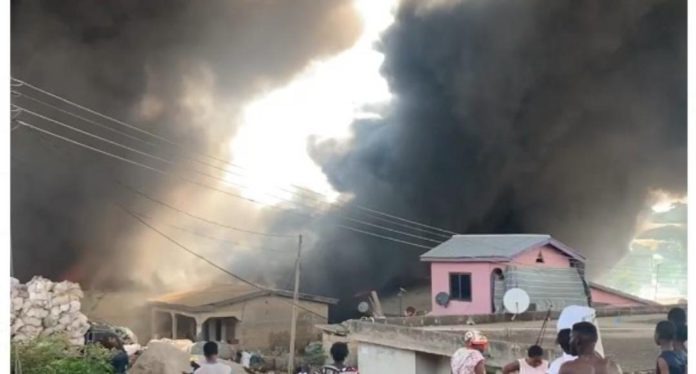 The inferno claimed Abubakar Sulemana as a casualty. His fifteen apartments burned down, four of them.

Before firemen had extinguished the fire, it had been burning for about 10 hours.

The firefighters faced significant obstacles in terms of the access route to the location and the presence of water hydrants.

However, the locals praised their efforts.

To help put out the fire, the Breman Fire Service Department had to request assistance from four other fire departments in the Greater Kumasi area.

He cautioned homeowners against storing combustible items inside their residences.

The fire department is right now looking into what started the fire.