Can You Imagine? Two SHS Boys Exchange Blows Over A Girl (Watch Video) 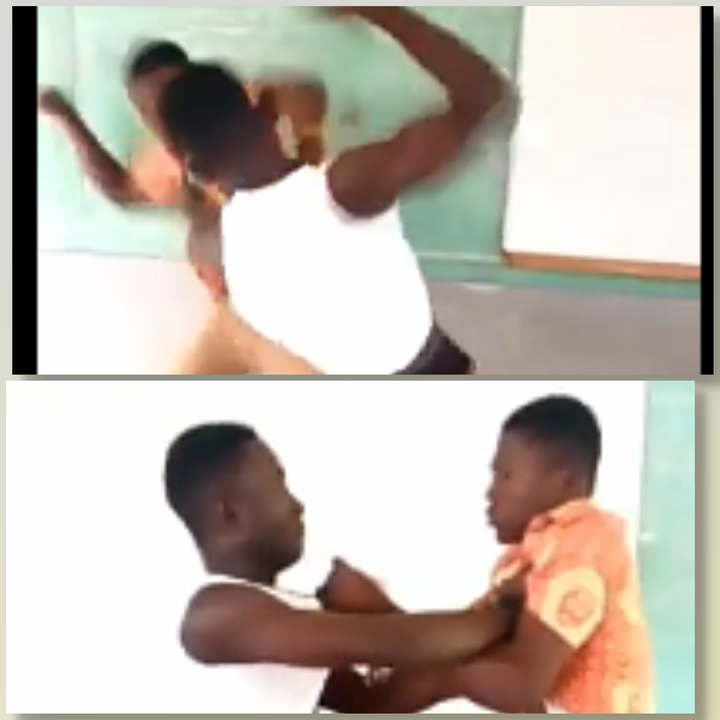 Ghana has finally reached a point where students who we see as our future leaders instead to focus on their studies indulges in acts far far away from the mainstream of the education system. This acts of theirs has finally proved Ghana has no future. Everyday what we hear is student has done this, students have done that to be sincere actions needs to be taken finally. There hasn't be a single day we do not hear news about our SHS student.

Just recently it was reported that, final year students set school ablaze after they were denied "apor" for their wassce and out of disappointment, teamed up with some of their colleagues to burn the school into ashes. And per my view, government should start it from there taking actions against student misconduct.

Following this, Ghana still records student misconduct. There has been a video Trending all over the social media which captures the moment two male boys were seriously exchanging blows at each other over a girl ride in their class room. The identities of the students are still not known since the time the video hit the internet.

The cause of their fight is though not confirmed yet but believed to be over girl which started after one discovered the other mate is chasing his girlfriend. This has been common and yet still looks common in gents. It was dramatic at the moment as each acted as super hero at that moment. The video also saw other mates cheering them up each supporting his fan. It looks as if it was an open fight since none of the colleague who were seen at see of the fight made no attempt to separate them. This was said to have happened in one of the renowned SHS schools in Ghana which is yet to be identified. We can not actually confirm what happened next after their fight.

The video below tells the whole story.

People reacting to this mentioned teachers as being the cause of all this mess since no authority was present at the moment. Per my view, I will never say the teachers are to be blamed because critical look at the video shows that, their fight was after school which at that time, no teacher or authority will be around.

Please let me hear you in the comment section, Should The Teachers Be Blamed For This?