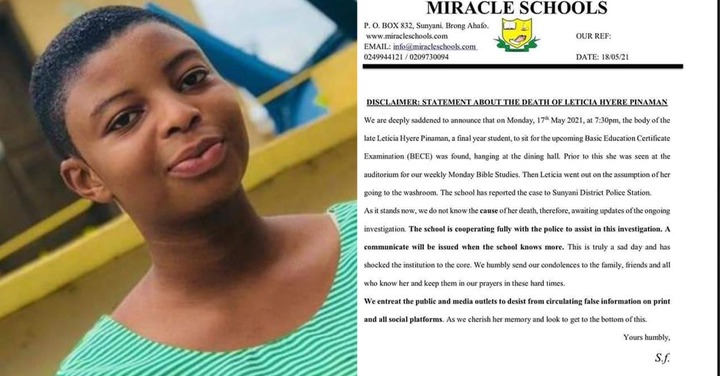 It has been revealed that Leticia Hyere Pinamang was with the bible studies group moment before her death was announced.

The Miracle School authorities have released an official statement to explain the cause of death of the late Leticia Hyere Pinamang.

According to the letter, Leticia was a final-year student who was preparing to sit for the upcoming Basic School Certificate Examination.

The statement, unfortunately, added that Pinamang was found hanging in the dining hall of the school for reasons that are yet unknown to anyone.

It added that even before the late student was found dead, she was with the Monday Bible studies group. A clear indication that Leticia was a true Christian who never jokes with her maker.

It further added that the school has officially reported the case to the Police and investigations have begun.

They have assured that all the needed assistant will be provided to the police to know the exact cause of the death of the young final year student.

“This is a truly sad day and has shocked the institution to the core. We humbly send out condolences to the family, friends, and all who know her and keep them in our prayers in these hard times. We cherish her memory and look to get to the bottom of this”. Parts of the statement added.

Below is the full statement 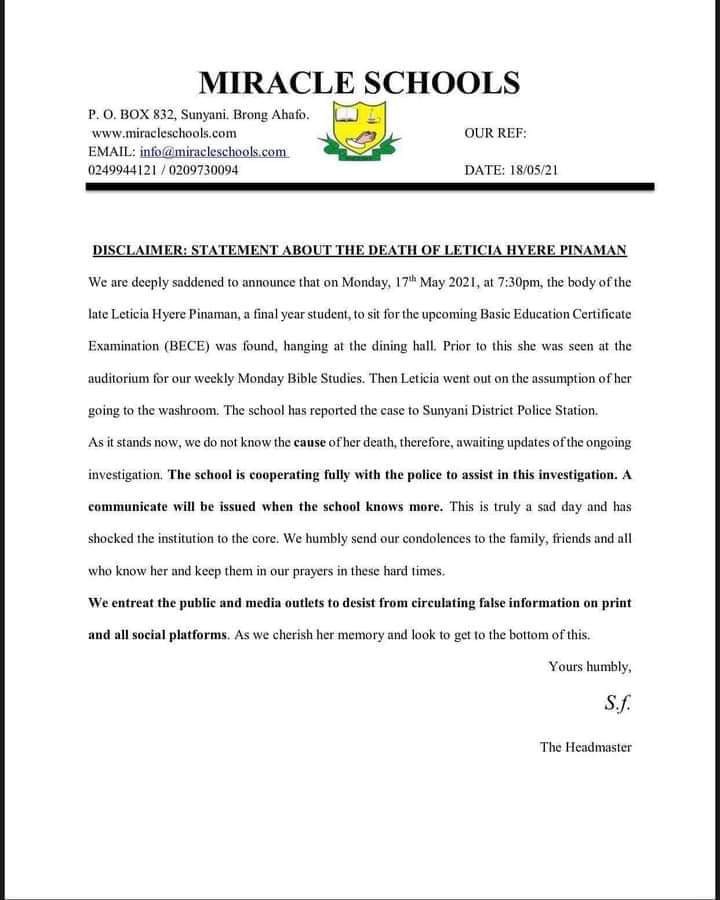 The sudden death of Leticia Hyere Pinanamang, a student with the Miracle Preparatory School was announced with utmost surprise to many.

It is reported that a friend visited the dining hall of the school and saw the lifeless body of Leticia hanging there.

She started shouting for help and that invited a lot of people to the scene, including authorities.

In the meantime, the mother of the late Leticia Hyere Pinamang, has debunked rumors suggesting her daughter committed suicide.

According to her, Medical Doctors have indicated that there are no signs indicating her daughter died through suicide.

"I Miss You Kobby, Please Come Back" Girlfriend Of The Police Officer Killed In Bullion Van Weeps