A Letter signed by the District Chief Executive for the Ekumfi District Assembly of the Central Region, Hon.Ebenezer Monkey has suggested that, the wife of the Mfantseman Municipal Municipal Chief Executive Mrs. Khadijah Anderson has been approved an Award Scholarship of Ninety Thousand Ghana Cedis (GH¢90,000.00) in cover of her tuition, accommodation and a monthly stipend of One Thousand Ghana Cedis (GH¢1,000.00) which is the equivalent of $14,634.00 and $163.00 respectively. 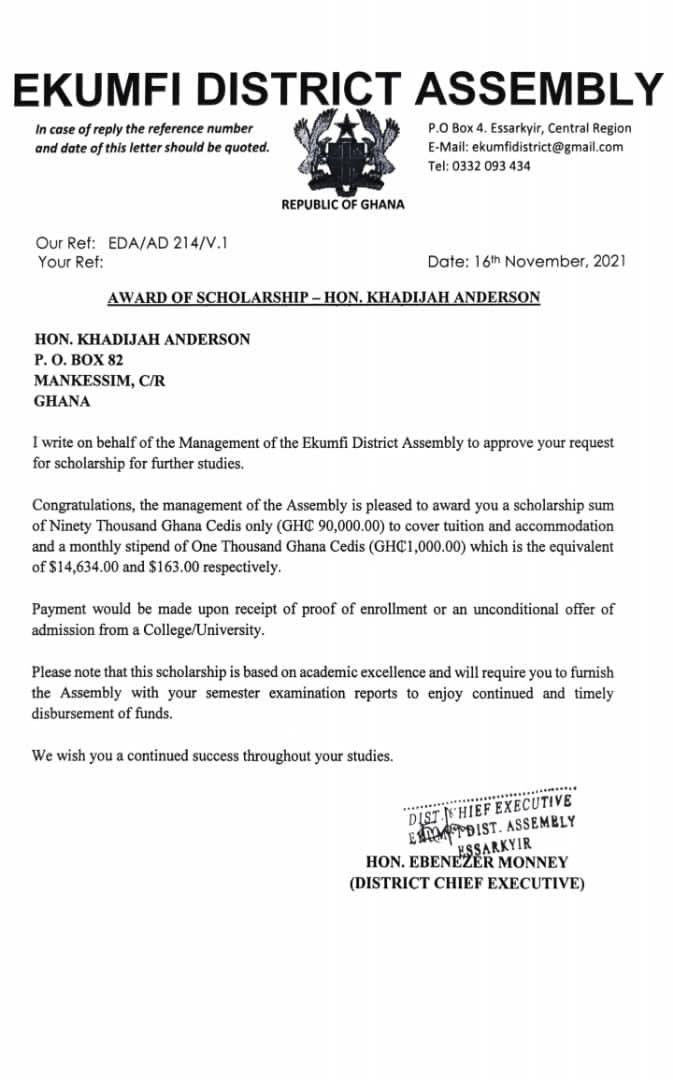 According to the statement, the payment was done upon receipt of proof of enrollment or an unconditional offer of admission from a College University.

Information gathered revealed that, the beneficiary was to start school at abroad 2021 but still in Ghana and is not attending to any school as it was stated in the later.

Also, the such beneficiary is the wife of the Mfantseman Municipal Municipal Chief Hon. Ike Lord Enu and it's alleged that, she's on six Government of Ghana Payroll, hence the Masloc Coordinator for the Ekumfi District Assembly.

Secondly She is the Human Resources Officer for the Ajumako Enyan Essiam Government Hospital. She is also the School Feeding Monitoring Director for the Central, Western and Western North Region.

The District Chief Executive resumed Office in October, 2021 and approved such Scholarship scheme in November which was too early according to the Residents.

Report has been revealed that, many people in the Ekumfi District have been denied sponsorship from the Assembly due to lack of adequate money to support the needy students.

The District Chief Executive for the Ekumfi District Assembly Hon. Ebenezer Monney has said, the money was approved by him but the Assembly was not able to pay such amount to the person.

The District Chief said, the Assembly wasn't having such amount of money so they didn't give to her. The Person is as at now in Ghana so they called such Scholarship off according to the DCE.