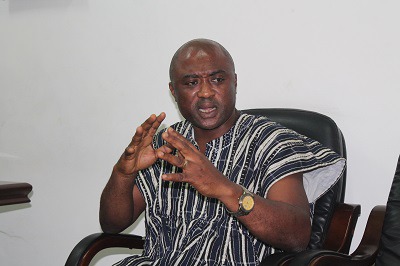 The Ghana National Association of Teachers (GNAT) has appealed to the management of the Ghana Education Service (GES) to prevail on its district directors of education to desist from putting impediments in the way of diploma holding teachers from enrolling in the three-semester top-up programme.

It said some district directors were putting clauses in the way of some diploma-holding teachers who had not served four years in the service from taking advantage of the top-up programme.

The General Secretary of GNAT, Mr. Thomas Musah, who raised the red flag last Saturday in an interview with the Daily Graphic.

Described the posture of those district directors as “contrary to that of the Minister of Education, Dr. Matthew Opoku Prempeh, and also the arrangement by the parties involved”

“The directors should not run ahead of us and be telling us that it should be four years. We are saying that it is unacceptable, and they should not go against the pronouncement and the directives of the minister.

This is an intervention that the Minister of Education, the University of Cape Coast, and the GNAT have reached and if any director has any problem, then the three parties will have to look at it and not a district director calling for something that does not exist,” Mr. Musah explained.

The government, through the Ministry of Education, has collaborated with the University of Cape Coast to run a three-semester programme for all diploma holding teachers to enable them to upgrade themselves to degree holders (Bachelors in Education).

This move is to ensure that the minimum qualification required to teach in schools in the country is a degree (B.Ed), starting the year 2022.

Mr. Musah explained that the position of those district directors was problematic since the days where teachers were made to serve for four years before upgrading was over because the current discussion was a special intervention to address a problem.

“Hitherto, when you come out of college, you needed to do four years before you go and upgrade but now, that regime is no more there because there is a reform that is saying that the entry point is a first degree and from 2022, the first cohort with the first degree will be joining us,” he explained.

He recalled that when the diploma was introduced in the colleges of education and was made the entry point for the service, all those who were using the Cert ‘A’ were all allowed without any hindrance to go back to their nearest colleges of education to upgrade themselves, “and that has been the convention.

He recalled that the GNAT started the agitation for intervention of the diploma holding teachers to attain a degree when the government started the education reforms in 2018 with the decision to convert the colleges of education into satellite campuses of some public universities.

Mr. Musah said the concern of the GNAT was that the management of education could not ask one group of people “in the same scheme of framework to go and do a first degree and you are telling those with the diploma to hold on for four years.

“If you have opened one door for one group of persons to go and get a first degree by 2022 and you close the door to the thousands of them that they should wait for four years, then, it would have been better not to start it at all,” the GNAT general secretary explained.

Mr. Musah stated that such a move would worsen the plight of the majority, who were already in the system, “and that is why in the wisdom of the collaborators that; give these people the open door as their juniors are doing the first degree, let us regularise this particular top-up programme.”

The GNAT General Secretary said it was, therefore, good news when the sector minister at the World Teachers Day, announced the intervention programme for the diploma holding teachers.

While thanking the sector minister for bringing into fruition the intervention, Mr. Musah urged all diploma holding teachers to take advantage of the intervention to get their first degree within a year.

GES Ghana Education Service Ghana National Association of Teachers Matthew Opoku Prempeh Thomas Musah
Opera News is a free to use platform and the views and opinions expressed herein are solely those of the author and do not represent, reflect or express the views of Opera News. Any/all written content and images displayed are provided by the blogger/author, appear herein as submitted by the blogger/author and are unedited by Opera News. Opera News does not consent to nor does it condone the posting of any content that violates the rights (including the copyrights) of any third party, nor content that may malign, inter alia, any religion, ethnic group, organization, gender, company, or individual. Opera News furthermore does not condone the use of our platform for the purposes encouraging/endorsing hate speech, violation of human rights and/or utterances of a defamatory nature. If the content contained herein violates any of your rights, including those of copyright, and/or violates any the above mentioned factors, you are requested to immediately notify us using via the following email address operanews-external(at)opera.com and/or report the article using the available reporting functionality built into our Platform 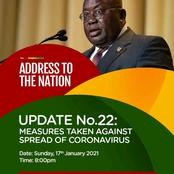 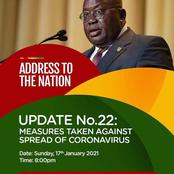 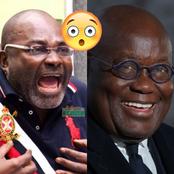 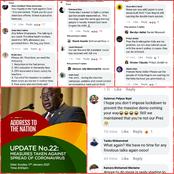 Covid 19 - Akufo Addo to address the Nation tonight. Will there be a possible lockdown? 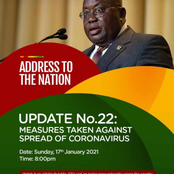 Haruna Iddrisu Was Not Elected, He Was Selected And Appointed 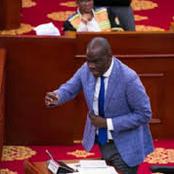 Issues likely to be addressed by the president in his 22nd address to the nation. 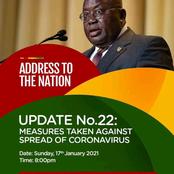 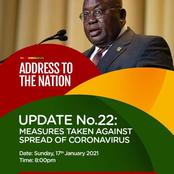 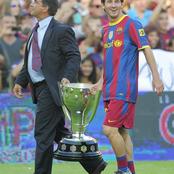 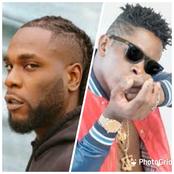