Mission Schools Should Be Autonomous And Run As Private Schools 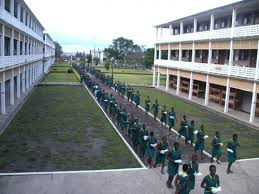 The issue of Muslim students at Wesley Girls’ SHS to fast in the ongoing Ramadan has become an trending top on various platforms as Christian Council of Ghana and the Catholic Bishops Conference have declared support for the decision of the Methodist Church and authorities at the Wesley Girls’ SHS not to allow Muslim students to take part in the fasting, based on a nincampoop evidence that it will "cause ulcer", hence triggering gradual conflict between mission and Islamic schools in the country.

Most of the Mission schools are public schools and run by tax payers money, which accommodate every citizen irrespective of your ethnic and religious background. Legon presec and ahmadiyya schools to name a few have been practicing religious inclusiveness and that hasn't had any negative impact on their core mission or academic performance. The fact that institutions have rules or laws doesn't mean those laws are always right.

This has brought about the debate whether the Mission Schools should be autonomous and run as private schools in Ghana.

A session of Ghanaians are of the view that goverment should allow them become autonomous and run as private schools, seems the christians in the various Islamic schools are never force to practice Islam on campus but every muslim student in the various christian schools are force to attend morning devotion and even attend church on sundays.

This they think is becoming clear that Ghanaians are losing religious tolerance which they see as unfortunate meanwhile the mission schools are run with the tax payers money and can't contain people of other faiths to practice their religion in peace.

Government should therefore use tax payers money on public institutions where every religion is tolerated, this will help Christians not go to a Muslim school and impose their doctrines and beliefs on them . Same way a Muslim can’t do same In a Christian established school .

I think it's has come to a point we understand the differences between Mission Schools, Islamic Schools and Government Schools, to help bring peace in our educational system.

Mission Schools were established with donations and offertories from the churches. They weren’t established with Tax Payers money. Same applies to Islamic Schools. We can only plead that they make those schools more religious-inclusive. Yes, government now run those schools but it doesn’t take away the fact that the schools were set up by the churches or Islamic institutions. Remember, the churches have been fighting various governments to cede control of their schools to them.

As part of its missionary objectives during the colonial era, churches established many of Ghana's senior secondary schools, several of which are now branded elite schools. But a 1984 take-over of their schools, placed its administration and management under government control.

I think a mission school can execute and practice its policies, no one is against that, but for a mission school to trample over the religious rights of others; this is illegal, unconstitutional and infringement of human rights.