By Kwhabena (self media writer) | 2 months ago 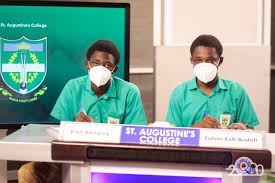 The all-male St Augustine's College trampled its opponents in the eighth stage of the 2021 National Science and Maths Quiz, making it a terrific day for contestants and supporters across the country (NSMQ).

St. Thomas Aquinas promised to be a worthy contender, and Anlo SHS were no match for the two-time champions, Augusco, as Attah Prince, and Adjaho George displayed their prowess and zeal.

Despite the efforts of the 2013 champion from Cantonments-Osu, Augusco's supremacy could not be stopped.

As Round Two came to a close, happy students and supporters of St Augustine's College took to social media to celebrate their anticipated victory. This is because, by the end of the second round's Speed Race, Augusco had quadrupled the points of St. Thomas Aquinas.

Some adherents of St. Thomas Aquinas clung to whatever hope they had, believing that the war would end only when the bones were rotten.

However, this only lasted until the end of Round 4. St Augustine's College had a 61-point lead at this stage in the game. St. Thomas Aquinas, the closest competitor, received 38 points. In the competition, Anlo SHS was still finding its stride.

Some people believe Aquinas should give up and return to Accra to do what he is most known for — indulge in "jamma."

With 64 points, St Augustine's College qualified for the quarter-finals.

It's another failed attempt by St. Thomas Aquinas candidates to emulate their predecessors' achievement from 2013. After their colossal triumph on Monday, November 15, Augusco's undeniable desire to wrest the trophy from defending champions Presec-Legon should ring loudly in the ears of all contenders.

Content created and supplied by: Kwhabena (via Opera News )

How to prepare Tuo Zaafi