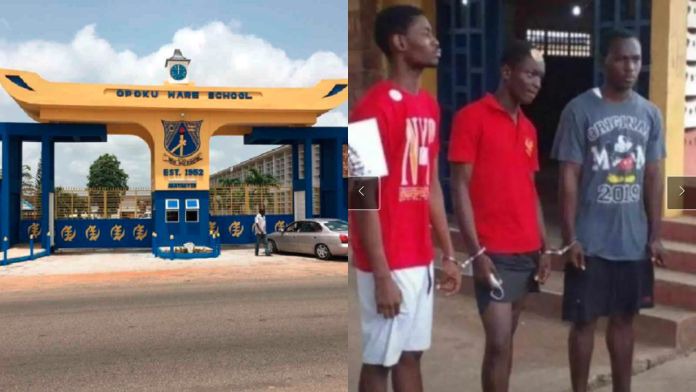 On Friday morning, police notified the school administration, and it was determined that the suspects were indeed Opoku Ware School students.

According to records, the three suspects were removed from the boarding house, the school said in a statement on Tuesday, August 16.

In the statement signed by Bismark Agyemang Duah, the secretary to the school's disciplinary committee, these children were accused of a number of offenses.

On the same day, Akwasi Adu Donkor and Asubonteng Osei Kwadwo were ejected from the boarding home for the following offenses: breaking school bounds, inappropriately dressing inside, and fighting inside.

Furthermore, Owusu Appiah Raphael was expelled from the boarding house for stealing from his roommates on multiple occasions. Following this incident, he and four other students were charged at TUC with breaking into someone's home without permission. He has continued to hide in the dormitory despite leaving the boarding house.

According to the school administration, all attempts to change these children have failed.In addition, school authorities have on numerous occasions discussed the notorious behaviour of the students to their parents.

Although school authorities are upset about the incident, they reiterated that these boys ignored all advice given to them.In a final statement they declared that:

"We want to be clear that the boys are our students, but at the time of the incident, they had already finished school and were in the care of their parents."

“Cocoa Farmers Issued A Warning To The Government Over Hunger

Johnnie Hughes Reveals: Why I Failed To Attend An Important Meeting Organised By The Government

To raise employee salaries by 20% would be suicide for the government, according to Gammey.