By Blind_Justice (self media writer) | 8 months ago 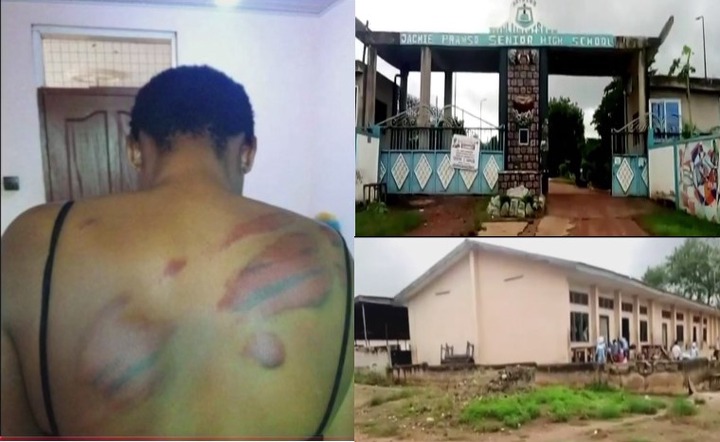 The head of school for the Jachie Pramso Senior High School in the Ashanti Region, Mr. Francis Donkor should be apprehended by the police for having brutalized a final year student. The poor girl, Mary Amoako Gabriel received several whips from the headmaster, leaving bloody marks and swellings at her back and other parts of her body.

The severity of the scars and pain Mary is suffering suggests the headmaster was very hostile and violent when he penalized the student for misconduct. According to Angel News’ reporter, Mr. Sampene the student received those marks through some lashes by the headmaster for disregarding an order barring the wearing of unapproved attire on campus.

In his account of what transpired, Sampane mentioned that the headmaster had earlier caught a male student for wearing a hoodie on campus. The young man was right before the class made to remove the hoodie and asked to return to the dormitory to wear an approved attire.

Moments when Mr. Donkor had left, Mary offer hers [a hoodie] to the poor boy who according to the report was topless. No one could explain what caused the headmaster to return to the class.

He was angered for seeing the boy with whom he had seized an unapproved attire wearing another one. The boy fearing what might happen run out of the class.

But Mr. Donkor was suspicious someone in the class might be responsible for disobeying his orders. He asked the class but none owned up for giving the boy another hoodie.

The entire class of nineteen (19) students were dragged to the assembly ground and the headmaster threatened to beat the hell out of them should they fail to give up the person who did that.

Just when he drew his cane, a student called out Mary’s name. The remaining students were spared but the headmaster vented his anger on her. He felt the poor girl had grossly disrespected him and to an extent caused his colleagues to suffer for her sins.

The cane could be heard cracking at every stroke laid at Mary’s back. She screamed throughout but none stopped Mr. Donkor from penalizing her.

Mary was left badly bruised at the back to an extent she could hardly lay on her back and rest. The parents were informed and the issue was reported to the police about the violence meted out at their daughter.

But Mr. Donkor did not deny what he had done. He justified why the student was made to suffer such a punishment.

Photos: Youngest daughter of Kennedy Agyapong graduates as Valedictorian in US with many awards