Mahama Paints the Laptop Initiative as Old: Others Point Out a Rare Reality to Government It can be recalled that under the Mahama Led National Democratic Congress Party regime, laptops were distributed to teachers and certain students.

The Laptops were assembled by a Ghanaian owned technology company known as RLG. RLG has become a household name so far as laptops and some other digital products were concerned at that time. 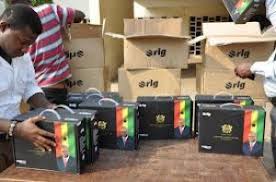 As the New Patriotic Party Led One Teacher One Laptop Initiative was fully outdoored today with the vice president making presentations, a flashback to the old days were made by some National Democratic Congress Party sympathisers. Take a look at the reaction below.

This Facebook user by name Mashood Issifu Mahama reacted to the occasion and painted the Laptop Initiative as an old Initiative initiated by the National Democratic Congress Party. He made it known that in the National Democratic Congress Party Led Better Ghana Agenda, teachers were trained and equipped to boost their interest in technology based research before the laptops were given out. He argued that, not only teachers were given the Laptops, but also students. This was done in order to help the students to be abreast with the Information Communication Technology course introduced. He did not make any direct attack on the project undertaken by the New Patriotic Party government, but to alert the populace on the fact that the initiative was an old one introduced by the National Democratic Congress.

However, a comment by another user seems to reveal a rare reality that is possible to occur if care is not taken.

Kofi Asiedu brings out this revelation that teachers could decide to use the laptop for watching movies and playing games in order to relieve themselves off stress. He draws the attention of government to the fact that if teachers are not well catered for, their attention or focus could be diverted from the most important things on the Laptop. If this happens, the positive effects of the Initiative may not materialize in the students.

Others praised the government for the initiative and we pray that this initiative would bring positive effects into the society.

Do you think that teacher's welfare would have a bearing on the use of the Laptops?