By EricMurphyGh (self media writer) | 5 months ago The work of the journalist is undercover and brings to light the hidden secrecy, some journalists flout these journalistic ethics because of interest in a particular story.

It has been widely reported in various portals that the Knust src President has embezzled some 9,100 cedis meant for an educational trip to South Africa, which i have deeply investigated on.

On the 24th of June 2022, Master Emmanuel Baidoo, former international and diaspora secretary for the University Students Association (USAG) assembled a group of student leaders from member institutions under the association for the said trip which according to the IDRS was an initiative by USAG in conjunction with South Africa Union of Students (SAUS).

My investigation into the whole trip revealed that the USAG IDRS communicated to various contingent Students from UG,KNUST & other reputable universities that the trip was a bilateral cooperation with SAUS who were to welcome the delegation from Ghana.

Reportedly,Knust src made provisions for 6 members and approved by director of students, Professor William Agyare regarding plans and budget for the approved 6 member delegation.

A 9,100 cedis sighted by a letter from the directorate was approved for each delegate.

All contingents from various universities paid these monies to the USAG IDRS for the necessary processing and paper works. Per the communication by the IDRS to the contingent, they were to report to the South African embassy to facilitate the process however due to inconsistency and lapses on the part of Master Emmanuel Baidoo, the process delayed for most of them.

On the day of departure at the airport,a suspension of ticket fraud was taken up by the Airport when the delegation from UG,UENR and KNUST had the case reported by the Women’s commissioner from the Knust Src delegation, Ms. Delali Major Setuga to the Kotoka Airport police command leading to the arrest of the USAG IDRS, Master Emanuel Baidoo.

Reportedly from my sources,a said Andy Anokye and Michael ABUAH were not at the scene of the incident at the time, as the same ticket had been booked for the them for Sunday due to an urgent meeting as sighted in a release by the KNUST SRC that the president was at a council meeting in Takorade.

A random interview conducted by this reporter revealed some fraudulent anomalies on fake document by the IDRS.

"For me although I'm a student of UG but not an executive i had no option,than fallout and many from other universities due to the incident of fraud at the airport,

However, after the arrest of the IDRS, part of the money that has been given to me and was paid the KNUST guys too also made two people sacrifice and top up with their money to make only 4 executives the trip while the investigation was pending" an interviewee alluded.

Conclusively,the money that master michael Abuah and Master Anokye was to travel with had to be disbursed to other members since they were not joining the flight so that the other executives could make the trip.

Per the investigation, it was revealed that flight ticket booked for Sunday 26th june 2022 for the President and the speaker by the USAG IDRS which compelled them to add monies to the ones ready to take off were fake.

“most of us also depended on the other part of the refunds but unfortunately we didn't receive it so had to leave the IDRS in prison which we were told was solved by the knust src president and other certain individuals from KNUST and USAG"as reported by source.

In anticipation,reportedly USAG IDRS couldn't retrieve the already invested money for them ahead of the trip which made the trip impossible for the two,Michael Abuah and Andy Anokye.

However, they had to wait for the return of their colleagues because there was a USAG congress on the day of their return, so they all made the trip to Winneba for the USAG congress.

This according to my investigation was communicated to the director of student affairs of Knust who then gave directions that the money should be refunded since they didn't join the trip to South Africa.

A release by the school authorities demanded a refund of the 9100 from master Abuah.

““The Directorate of Students’ Affairs under the authority of the Director approved an amount of GHC9,100 for your educational and leadership trip to South Africa as requested by the South African Union of Students (SAUS) in collaboration with the University Students Association of Ghana ( USAG).

“Investigation, your personal testimony and handwritten statements have proven that you did not embark on the trip. You are by this letter instructed to refund the amount of GHC9,100 by close of Friday, July 22, 2022 without fail,” the statement read.

Adding their voice to calls, the “concerned KATANENTALS” are demanding evidence of the refund, should the SRC President make the said repayments.”

My Investigations further proves the said amount has been paid by the parents of Michael Abua and received by the school authorities.

The ultimate question is, why wouldn’t the Knust administration invite Master Emmanuel Baidoo for further checks?

If every incident recorded was reported to the director of students affairs, why shouldn’t there be a communique to inform the student body of what transpired and bring to light that the money has been refunded? 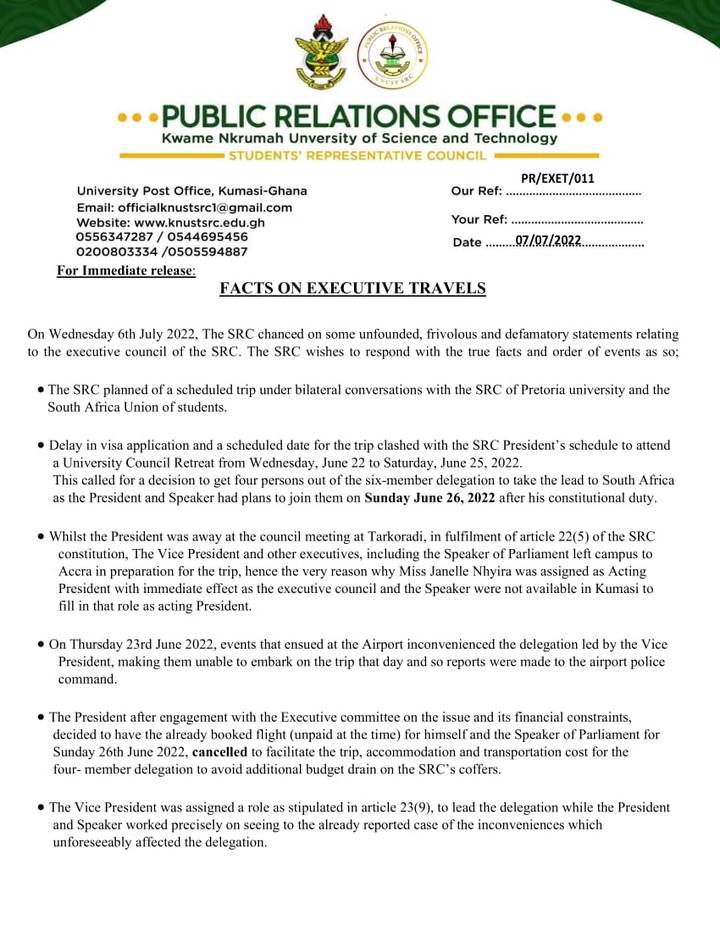 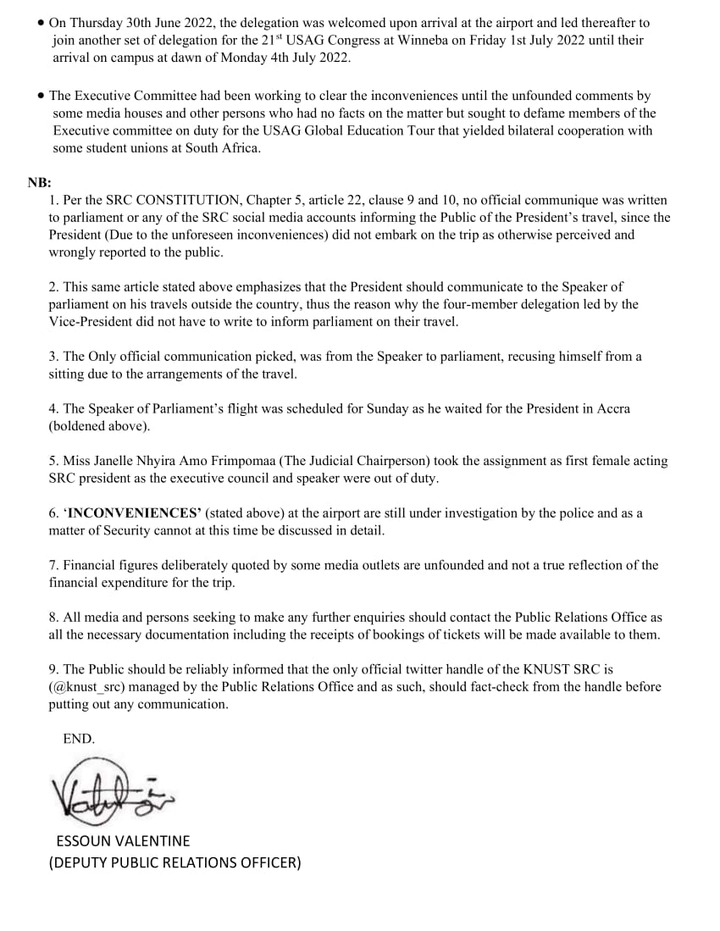 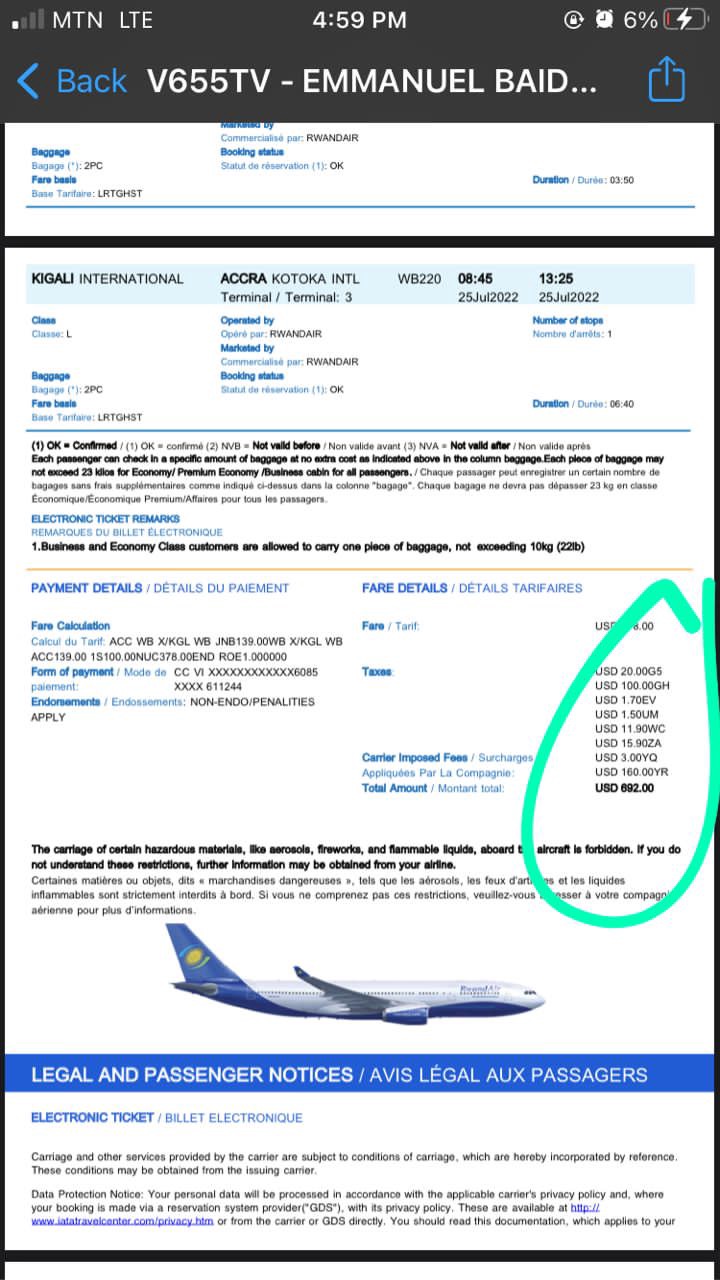 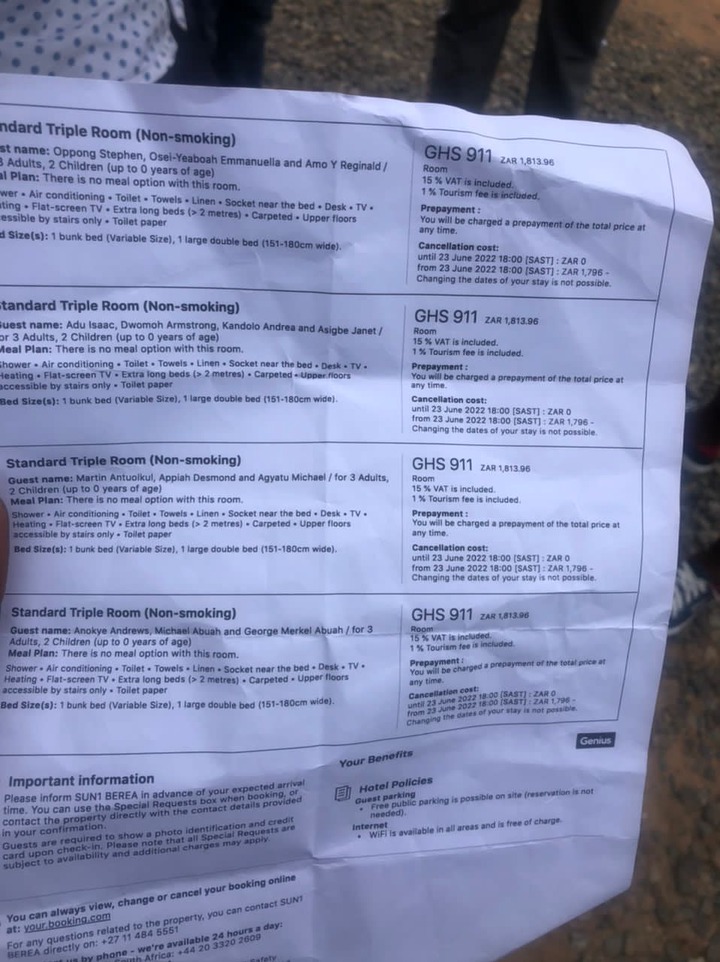