More Details on The WASSCE Students Dismissed, And 3 Teachers Interdicted Over Indiscipline in Ghana

Following the on Going West African Examination between the Final Year Students of Secondary Schools, About 14 Students were dismissed in the middle of the Exam over the Act of Indiscipline they exhibited. As most of this dismissed students are all Male students of SHS.

It was gathered that this fourteen students were dismissed following the misbehavior they displayed while the West African Senior Secondary Examination is going on in their school. As about three Teachers found also involved in this act where interdicted over interfering in Exam Source.

DailyGuide reported through a statement issued by Kwasi Opoku Amankwah, the Director General of the General Education Service (GES), States that this students caught in the Act were dismissed and barred from taking the On going Examination, while the three interdicted Teachers were arrested for onward investigation, as they have been handed to the security Agencies to further the investigation. As they are to leave their various schools immediately.

"The Fourteen students caught in the act of misbehavior and indiscipline as the West African Senior Secondary Examination is going, are hereby dismissed and barred from taking the Examination. They are expected to leave their various schools immediately. And the Three Teachers who were caught in the act of misbehaving with the Exam Source, are hereby interdicted and handed over to the Security Agencies for further investigation", Prof Opoku Amankwah said.

Also contained in the signed statement issued by the Director General of the General Education Service shows that this misbehavior and indiscipline was as a result of the protest by some students who kicked against the social distancing and Strict supervision inside the Examination Halls. Adding that most Educational Bodies has condemned the Act. He further said that all properties vandalized will be recorded, as the suspects will be surcharge adequately.

He extensively states through the signed statement that this dismissal of the unlawful students who were caught in the act of misconduct and indiscipline, will go a long way to serve and a caution to other students who intend to follow their footsteps. As they will have a rethink of the consequences that their actions might lead them to.

"The Students dismissed over the act of indiscipline as the West African Senior Secondary examination is going on, were caught protesting and vandalizing properties for the social distancing and the strict Supervision inside the examination Halls", Prof Opoku Amankwah said.

Furthermore, Prof Opoku Amankwah in his signed statement released the Details of the affected students as stated below:

Others are, Albert Agyekum, Robert Inkoom and Solomon Brako of Juaben Senior High School. As all the above mentioned students are to leave their various schools according to the signed statement by the Director General of the General education Service (GES), Prof Opoku Amankwah.

More also, the three teachers who were interdicted are, Thomas Anpkue of Tweneboah Kodua Senior High school, Evans Yeboah Kade of Senior High Technical School and Joseph Andoh of Sekondi College. As they are further referred to the security Operatives for further investigation. 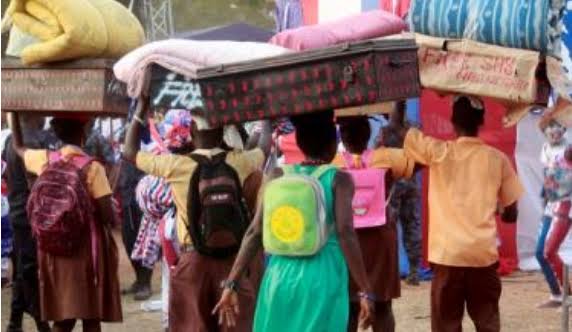