The 57-year-old woman, Elizabeth Yamoah, who wrote his final year JHS exams has been featured on the British Broadcasting Corporation. 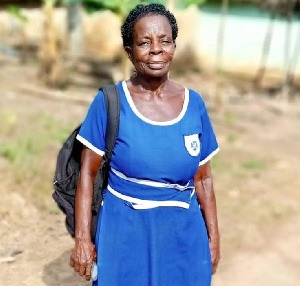 Elizabeth Yamoah completed his basic education in September 2020, as she took part in the Basic Education Certificate Examination. Also, she was the oldest candidate of the year and she completed Odoben Presbyterian Junior High School.

In a 2 minutes 15 seconds video report on the BBC News Pidgin platform, Madam Yamoah revealed that she enrolled in the school in order to achieve her dreams of becoming a nurse.

Moreover, she stated that she was forced to quit school at an early age after she lost her father. After dropping out of school, precisely primary four, she ventured into farming. 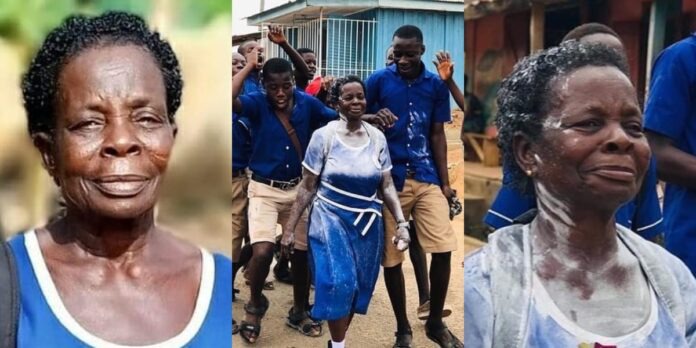 Stating why she went back to school in 2017, Madam Elizabeth Yamoah stated that, it was something dear to her heart. Also, she stated that she had an accident on her way to purchase her school uniform, in which she lost some of her teeth. She stated that it never discouraged her as she had a dream of becoming a nurse.

“One one Monday in 2017, I dressed up in my uniform, took my school bag, and went to Odoben Presby School to be registered,” she narrated. "Although people laughed at me, I was very proud and motivated by the free SHS education policy".

Elizabeth Yamoah went viral on social media after she was noted as the oldest person to sit the Basic Education Certificate Examination. Many people found it surprising due to her age. She was often found playing among her teenage colleague classmates, who could be her grandchildren. She was nicknamed by her mates “Auntie School Girl”.

Madam Elizabeth Yamoah furthermore, revealed that her favorite subjects were Religious and Moral Education and Information and Communication Technology.

She will clock 60 years at the time she completes her Senior High School education if everything goes on successfully.

Adding more to her aspirations of becoming a nurse, she added that she wants to become the assemblywoman of her area.

Madam Elizabeth Yamoah is a mother of four and has five grandchildren.