Privileged Niece Of Prez, Causes Rage On Twitter, As She Compares Ho Poly Graduates To Cambridge

By VerseTwo (self meida writer) | 14 days

Polytechnics in Ghana have been turned into Technical Universities, thanks to the vision of the most recent past President, who had a vision not just to award degrees but also, to open up the scope of whatever is taught the thousands of students who pursue higher education in these institutions.

Fast forward, the several Technical Universities are making progress, but there is the need to consolidate the gins made and help provide them with better infrastructure, to improve teaching, learning and innovation at these Technical Universities, dotted in almost all the regional capitals in the country.

Interestingly, the Ho Technical University, previously known as the Ho Poly is trending massively on Twitter, as one lady (Aku Akuffo, whose Uncle is the President) is said to have made the statement, which has been interpreted on social media as meaning that "a person with a certificate from Ho Poly, cannot enjoy some of the national cake," as seen in the screenshots of her original post. 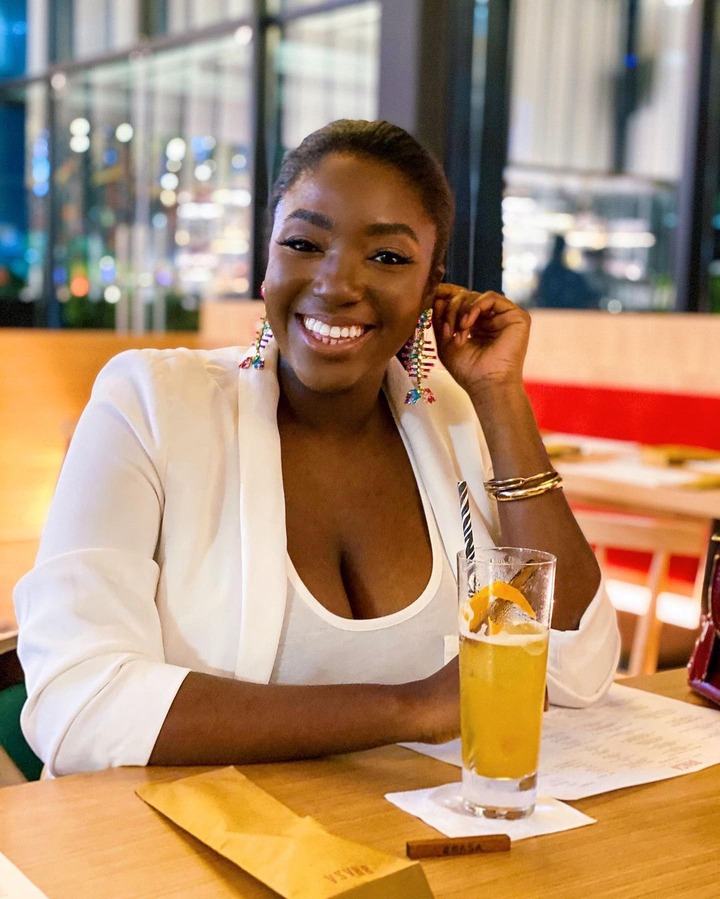 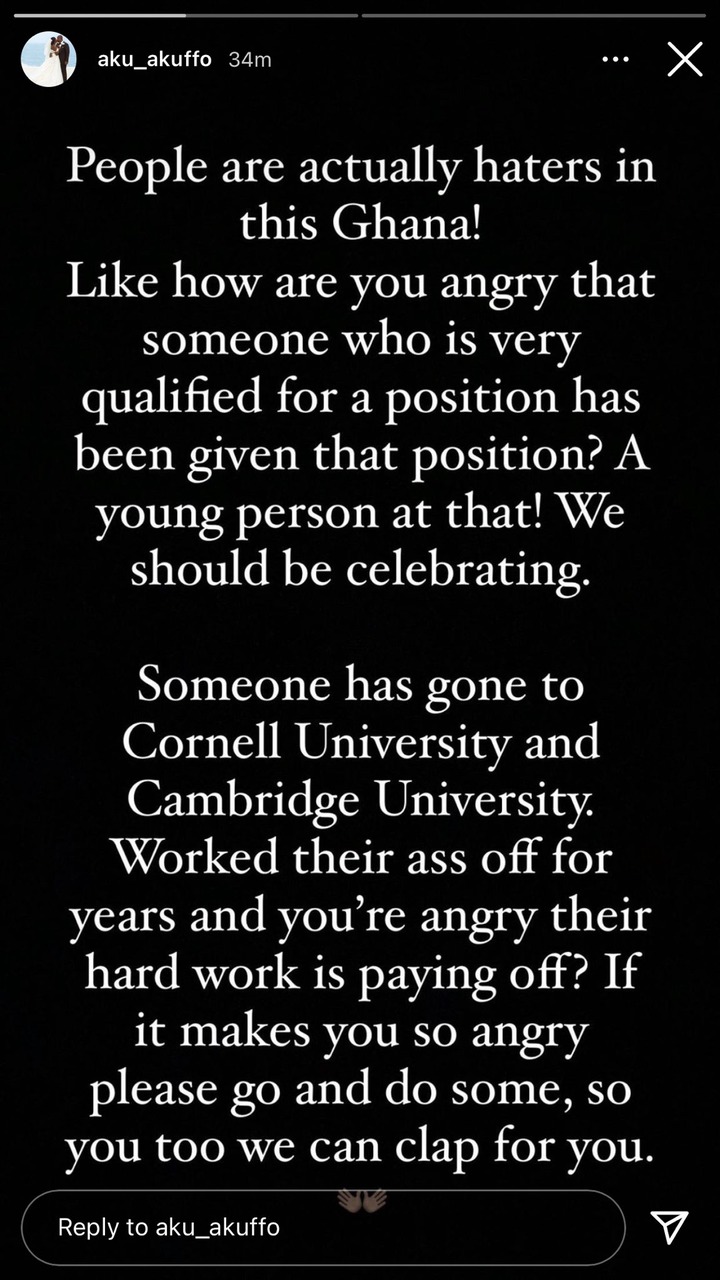 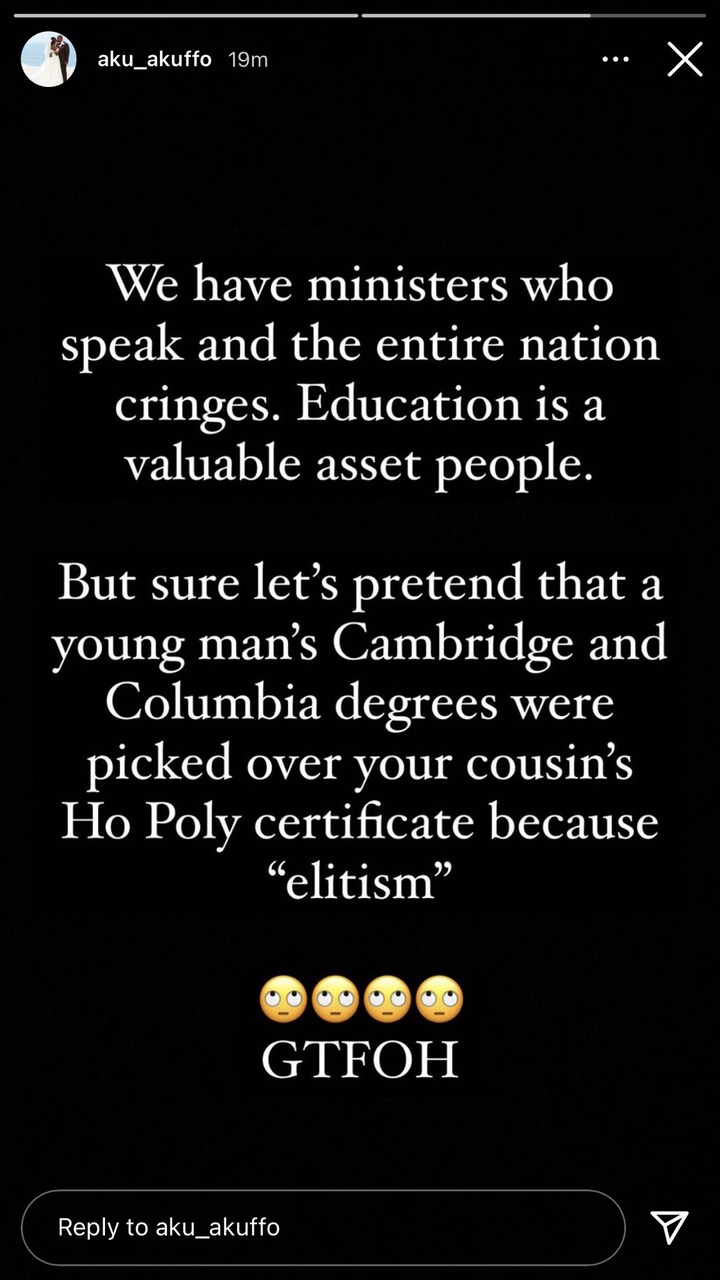 I bet the her surname, Akuffo rings a bell. She’s a London School of Economics (LSE), trained lawyer. She is a barrister of both Lincoln’s Inn in the UK and the Ghana Bar. Akusika’s maternal grandma is Oheneyere Georgina Yaa Adepa of Adepa pharmacy fame, who also doubles as a member of the Council of State in the present government.

She wedded in January of last year, in a plush, expensive and glamorous wedding, that saw every important government official and even the first family present, and according to rumours on Twitter also, she has landed a lucrative job at the office of the Presidency currently. 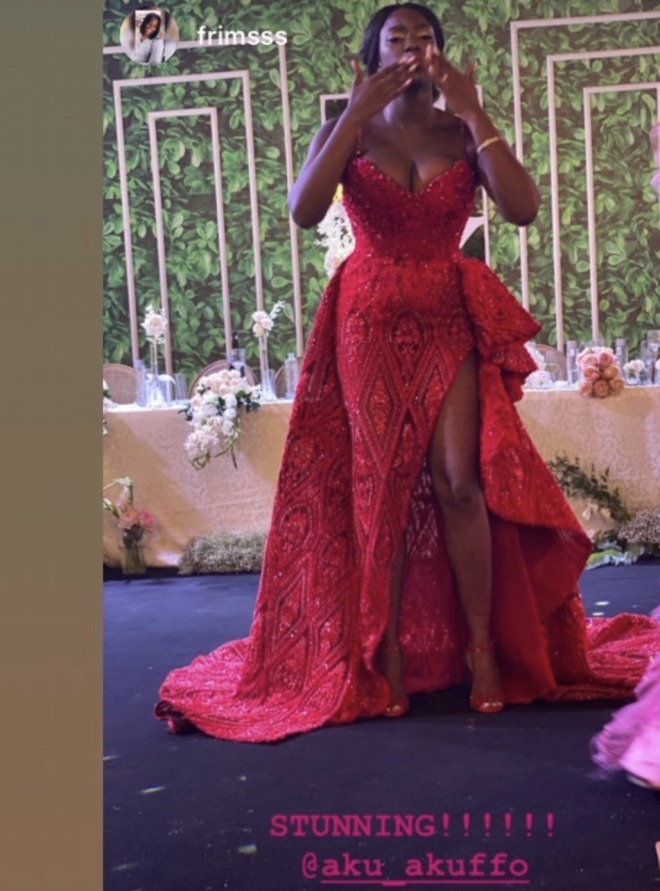 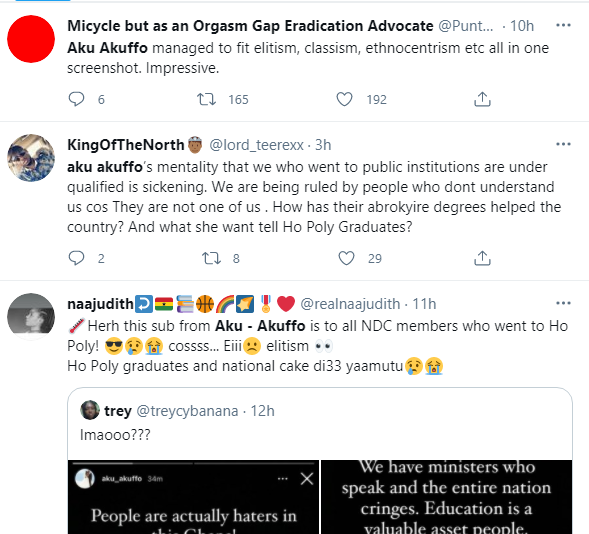 Commentary on Twitter, out of thousands shared on her disparaging remarks that sought to denigrate the status of graduates trained in Ghana, include the following:

KingOfTheNorth @lord_teerexx writes "aku akuffo’s mentality that we who went to public institutions are under qualified is sickening. We are being ruled by people who don't understand us cos They are not one of us . How has their abrokyire degrees helped the country? And what she want tell Ho Poly Graduates?"

Jude Duncan @mensaduncan writes "Imagine your whole life being funded by the taxpayer but it’s Ho Poly students you want to shade. Jokes on you.

Zoë G. @HerWildness writes "Now why is Ho Poly in it the thing that’s killing me is that the “elitism” is right there in the reference to ministers’ “cringey” English and “Ho Poly certificate.” Because Euro-American elite institutions >>>> Ghanaian education. Like the irony lmaooooooo

Hubie @HubieLaBelle writes "Aside the fact that Aku’s comment was not needed, she also revealed the perception most people have when it comes to TVET in Ghana. Ho Poly just took one for the team."

Jasmine @Jasmine_ghanaba writes "The Ghanaian graduates ankasa it's like we are too dumb. The country belong to us. We shouldn't allow those Cambridge/Cornell graduates to be taking up positions here as if they are better. The Ho Poly graduate school in our environment and are more qualified."

#FIXTHECOUNTRY @SABLADINHO writes "Stop being ignorant, if u find yourself in Cambridge Uni.. just know is by Grace, Ho poly too same Grace... we have brilliant, smartest people who couldn’t make it to that place but were able to work their as*out to employed u both... I say the difference is the...."

enore @Mensaa23 writes "See, this is why they didn't advertise the job. Because you won't understand. You need to have a certain mindset and must have gone to Cornell to appreciate what the whan whan of the dein dein will bring to the tourism economy of Ghana. Don't use Ho poly mentality to speak pls"

von @_whatitdobabyyy writes "Honestly a shame that she doesn’t realize that Cambridge vs Ho Poly doesn’t mean that one person is smarter/more qualified. Actually, that IS elitism. Just bc one person got the opportunity to study abroad doesn’t mean anything aside from that - opportunity."

Che @CheEsquire writes "They steal your monies to educate their children at Cornell and Cambridge then, these children later come and tell you that, your Ho Poly Certificate is useless but you'll still collect Ghs700 to defend their parents loot. May God bless you. You'll go to heaven."

Her Excellency @1daisie writes "Yes it’s good to study abroad. But that doesn’t give you the right to look down on a Ghanaian University . If you have beef with a Ho Poly student, target him/her. Na what has the school done to you."

﻿Aku from Sakumono @aku__addy writes “Your Ho Poly certificate” really shows you how the people we made rich with our taxes really see us. You queue to give them power, slave to buy their lavish homes and luxury cars, and are disgusted by the level of education they make available to you while their kids go Cornell

Demi @demiosei writes "That “Ho poly” comment was sooo unnecessary! Praise somebody for their achievements without trying to bring down another.

village_girl @village_girl_in writes "The educational system abroad is way better than what we have here in Ghana not to talk of Ho poly as a competitor to Cambridge! But being smart isn’t about the foreign degree you obtained! It’s the person in question! Is he smart ??"

TWENE JONAS @twenej0nas writes "I have more money that your professors at KNUST and Ho poly Combined. Because where I am The system is working 24/7 in the heaven. Afuom h) de3 even Jesus Christ will go broke meanwhile you have gold and all the other natural resources. Moagyimi too much"