There is no way Nana Akufo Addo can convince Ghanaians that he is unaware of Kwadwo Owusu Afriyie, an NPP leader known as Sir John, acquiring land in the Achimota Forest.

Portions of the Achimota forest have already been shared by the NPP's big gurus, so Akufo Addo and his family, Ken Ofori-Atta, Gabby Otchere-Darko, and others are likely to have portions there, but now that Kwadwo Owusu Afriyie's will has exposed them, they will stage a plan to deceive Ghanaians they don't know about it.

Kwadwo Owusu Afriyie, like the corrupt, deceitful, and cunning Akufo Addo, who said "God didn't make us poor, bad leadership did," while dehumanizing and insulting John Mahama, openly insulted both the late John Atta-Mills and John Mahama, calling the latter a thief. After his death, he is now seen as a thief whose interest lies in amassing wealth, rather than caring for ordinary Ghanaians. 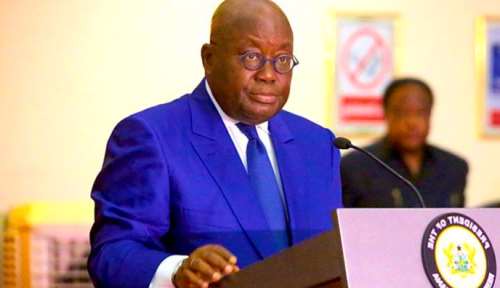 A thorough inquiry will establish that Akufo Addo and his family, as well as Ken Ofori-Atta, Gabby Otchere-Darko, and others, own land in the Achimota Forest. Never take my words for granted.

My loyal readers will recall that in several of my articles, I stated that time will tell when more scandals will hit Akufo Addo and that one of the reasons I find it difficult to support him is that, aside from the hate, hypocrisy, and tribalism tearing the president apart, tribal bigots, including writers and journalists, are causing more harm to the president.Imagine that, despite all of the crimes and corruption scandals that have plagued Akufo Addo's government since he took office more than five years ago, many Ghanaian authors, journalists, columnists, and judges are unable to see the major challenges that have brought the country to its knees.

But then along comes a writer who publishes an article claiming that John Mahama can only further damage Ghana and cannot rebuild it. You see how some writers are harming themselves and why are many people no longer interested in reading what they write?

To create the impression of being a talented writer, you should first write about the damage the president has caused to our beloved Ghana, and then offer the required recommendations or strategies to help the country recover.

It is not necessary to come out and tell Ghanaians that Mahama will further damage the country when this very president, whom so many people despise, departed Ghana in the best possible way, avoiding the hardships, high unemployment, and crime that have engulfed the country.

From the moment Nana Akufo Addo became president, his lifestyle, corruption, arrogance, hatred, pride, and ineptitude, without regard for regular Ghanaians, were enough to convince me that this is the type of president who will destroy our country, and I decided not to support him.

Since former Ghanaian leader John Mahama has been deemed corrupt, I will not waste my time writing about him. As a result, writing about the current president, Nana Akufo Addo, who is in power and in charge of the state's daily operations.

As a result, I established beyond a reasonable doubt that Akufo Addo will cause misery for regular Ghanaians because he is an opportunist rather than a leader. The tumultuous political events, unparalleled sufferings, and the economy's collapse are not only my witnesses, but they also validate everything I've said and written about Akufo Addo in the past and now.

He sat at home, frustrated and hungry for power, practicing the correct words to deceive Ghanaians, and he won the 2016 presidential election, but not the 2020 election, because the majority of Ghanaians have learned he is a liar, incompetent, and super corrupt like John Mahama.

I value myself, so I would not follow or trust a president who told Ghanaians Mahama was a liar and thief while stealing $330 million from COVID funds and telling Ghanaians the World Bank only offered $100 million.

How and why would any rational person support a president who can't even investigate or speak about deaths in his own country but can speak about George Floyd's death in America, a president who sent criminals after a woman he had an affair with to rob her belongings in order to avoid being exposed, and a president whose name has been mentioned in a murder crime involving an NPP politician?

"I bequeath my piece of land that I jointly hold at the Achimota Forest in the name of DML Limited to Elizabeth Asare Boateng, who is domiciled in the USA at the time of making this will forever," says Sir John in his will.

You're all toothless dogs who bark every day as though you want to keep robbers out of our homes when in reality; you make political theft so easy. I need to tell Ghanaians the truth, nothing but the truth, that neither Akufo Addo nor the NPP government can do anything for ordinary Ghanaians today or in the future because the goal of this government is to collect riches, they don’t even have a plan.

The following days or months under Akufo Addo's presidency will be the most traumatic in Ghana's political history. Hardships will worsen, the unemployment rate will rise, and commodity prices will become unaffordable. More importantly, the president will be embroiled in numerous scandals following the NPP.

The NPP government is floundering; they see that they have failed Ghana, and they have no chance of winning any elections in 2024. What they are doing now is giving ordinary Ghanaians hope that they care about them, but not this time, because even the most uneducated Ghanaians living in the most remote parts of the country without electricity are crying out for a savior, and Jean Mensah will not make the same mistakes she did in 2020.

Eight Foods You Probably Did Not Know Constipate According Health Experts