Wee toffee was given to me by a friend.' - Funny Face informs the court

After being freed from a psychiatric facility, Funny Face informs the court, "My friend gave me wee toffee." In a video that has gone viral, the actor used unprintable obscenities to criticize the General Manager of the Despite Media Group, Fada Dickson, EIB Boss, Bola Ray, and Togolese footballer Adebayor. 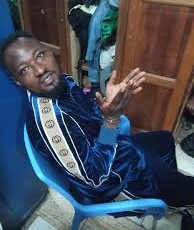 The 'Cow and Chicken' actor admitted to being mentally unbalanced before the Kaneshie District Court, which was presided over by His Worship, Kofi Oheneba-Kuffour.He claims he did not appear in court with his counsel because he believes he is the source of his own issues.

He claims that he did not bring his lawyers to court because he believes he is the source of his own issues. When asked why he did not come to court with his lawyer by His Worship Kofi Oheneba-Kuffuor, Funny Face replied, "My Lord, I have lawyers, but I feel they shouldn't come." Because I didn't take my medications, I created my own issues. "I'm suffering from mental illness."

Benson Nana Yaw Oduro Boateng, better known as the 'Cow and Chicken' actor, told the court that his recent issues began when his baby mom, Vanessa, took his twin daughters, Ella and Bella, away.

He also accused his baby mom of playing mind games with him.

Funny Face launched another chapter, this time with a query to the magistrate, just as the court believed it had heard enough.

"Do you know Bola Ray, my Lord?" Before telling the judge that he was under the influence of drugs, he insulted him as well.

"It was my friend who gave me 'wee toffee' after he was released from the psychiatric institution," he claims.

In answer to the prosecution's request that he be brought to the Korle-Bu Teaching Hospital for mental re-examination, he stated that he does not want to be taken there. However, he would rather go to any other hospital. According to him, he suffered greatly during his stay at Korle ban because the individuals there "farted too often," causing the courtroom to erupt in laughing.

Content created and supplied by: Aiyshadd778 (via Opera News )