Watch Video: My Children And I Have Been Living In The Toilet For 6 Years After My Husband Left Us.

By EstherCole_World (self meida writer) | 7 days In life, everyone has a sad story to tell, but hearing one's story makes you think that yours is nothing. Indeed, people are going through a lot within our society. What is more devastating than an abandoned woman to live with her two children in the toilet because of poverty? This is the story of Joycelyn whose husband abandoned her and because of the hardship of life, she had nowhere to stay or live other than a toilet which she filled with mud to become her home.

According to Joycelyn and her children, they were once living a happy life even though they were not that rich. Joycelyn husband was a responsible man who provided his children with their basic needs without lacking anything but as good as their father was at his responsibility, he had a bad side which always changed the atmosphere of their home whenever the father was around. Joycelyn's husband had an uncontrolled level of drinking alcohol. He always came home late and, starting from the wife to the children, he would beat everyone up. This put fear within the children and anytime they heard of him, they would quickly run hiding from him.

This family was known in their village for always quarrelling at night. In fact, it was a bad record. Their neighbours were tired of their noise at night and would sometimes call the police to settle their dispute. According to Joycelyn, her husband always blamed her for being illiterate and added that they would have achieved a lot in life if the wife had taken her education seriously. This became his problem and told the wife he had regretted marrying someone like her who only knows producing children. 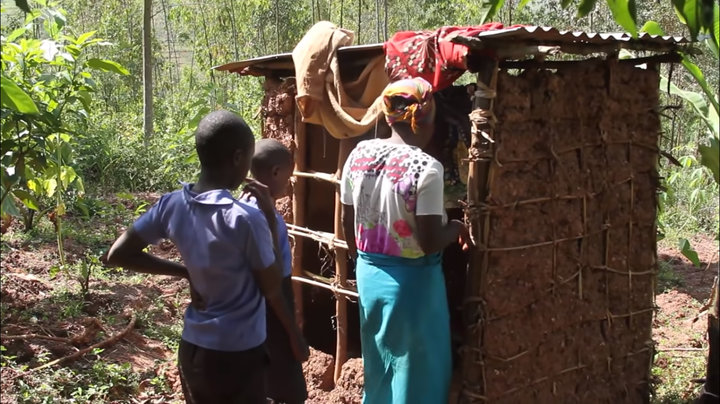 These always ranged pain in the heart of Joycelyn and even attempted two suicides but all failed. One day, the Dad woke the four children up and told them that he would be going somewhere far, but they thought it was a joke. This family waited for the father for hours and days but he never came back. This was when life started becoming difficult for the children as well as the mother. Getting food to eat became a problem for the family because Joycelyn was not working. The children could go the whole day without food. This affected them psychologically and their performance academically. They spent 6 months without paying rent and the landlord could not accommodate them anymore. Getting a house to sleep in became a problem. They spend 6 months sleeping on the street. As Joycelyn was walking in the village one day, he saw an abandoned toilet in the bush and decided to turn it into their new home. They covered the toilet with mud and started living in it, though the space was too small to accommodate the four children as well as the mother. Joycelyn took two of her children to their grandmother in the village so that she can concentrate on the two. According to her, they have lived in the toilet for 6 good years because they have nowhere to go.

Joycelyn work on people's farm for them for money but because of the summer, work is not coming as it used to. She says the problem right now is getting her children in a better place so that they can concentrate on their studies and improve on their performance at school.

Please if you want to watch the video the link is below;

Content created and supplied by: EstherCole_World (via Opera News )