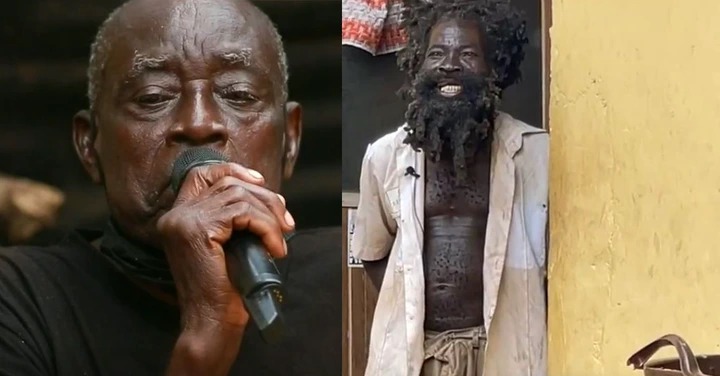 Papa Yaw Mensah, an eighty-year-old father who broke down in tears while recounting his son's story, claimed that "Mona Mobl3" is his first child. He says that his son was a brilliant student in school, but that things changed along the way.

“You'll never comprehend how he became so enraged. He was in good health during his school years. It began in second grade when he was preaching the gospel but the communication was shaky. As time passed, I became increasingly aware of his out-of-control actions. He moved outside to the streets, a strong sign that he was insane.” Papa Yaw Mensah sat up and took note.

Papa Yaw Mensah goes on to say that his son can be average at times. He claims that his son buys and sells to reasonable people in his current state.

“He possesses a great deal of wisdom. He sells used goods to the general public. He makes and sells to decent folk. On the street, he also begs for cash. We trim his beard for him now and then, but he has a lot of hair.” He told Kofi Adoma Nwanwani about it in an interview.

He went on to say that marijuana smoking is to blame for his son's current state.

He is bright, but his biggest issue is that he has been taking drugs. He is unable to resist, and if he smokes, he takes on large roles of weeds and becomes quite content. I drove him to Ankaful, where he was examined and the doctor asked all of the pertinent questions, and he passed. As a result, the doctor released him. He also says he'll quit marijuana. He threw away all of the medications the doctor prescribed for him because he said he isn't insane.” He made a point.

Comment and let's see what you think about the story.