By Blind_Justice (self meida writer) | 17 days Controversial hiplife artist and businessman, Kwame A Plus has taken a swipe at the editor in-chief for the New Crusading Guide newspaper, Abdul Malik Kweku Baako, as being deceptive in his argument on affairs of the country. According to A Plus, this has been characteristic of Kweku Baako for the past forty (40) years.

He stressed that it's a shame how the veteran journalist manipulate content to 'lie' to the Ghanaian populace. Kwame A-Plus disclosed that Kweku Baako was his mentor while growing up but this seems to have come to its end after realising an 'unpleasant attribute' about him.

He wrote on Facebook that Ghanaians had been misled by Kweku Baako for over 40 years.

"When we were growing up, this man called Kwaku Barko was our mentor. Such a shameless old man who has thrown dust into the eyes of many people for years because they don't read. This man has lied to a whole nation for over 40 years." He noted.

His comments were pinned to an except of Kweku Baako's argument on News File that, the letter of warning that was issued to Ibrahim Mohammed, alias Macho Kaaka was fake. Mr. Baako told Sampson Lardy Anyenini, the host that his enquiry with the Criminal Investigation Department (CID) boss of the Ghana Police Service proved that the letter was fake, in the sense that it did not bear the emblem as expected of an official letter of the police. 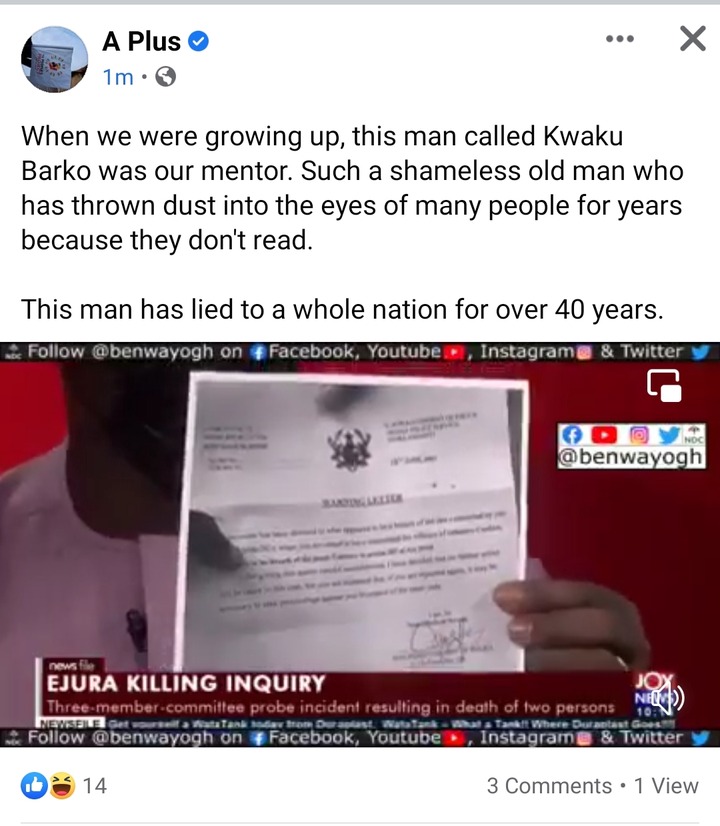 But Dr. Randy Abbey who was a penalist on the show corrected that the Police Command has acknowledged that the letter was genuine and to an extent provided detail on what occassion the issuance of that warning letter to Kaaka. Without hesitation, Mr. Kweku Baako conceded.

But Kwame A-Plus seems to have hit the jackpot to settle a score , sort off, against the veteran journalist. His post had provoked a huge backlash on Kweku Baako.