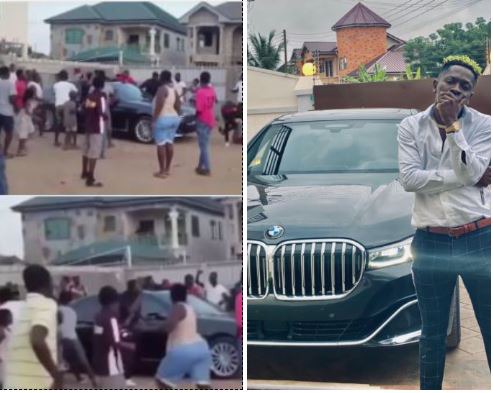 This happened real as Dancehall superstar Shatta Wale, was seen as he has been involved in what would could have a disaster to his persona. The serial music hit maker was seen somewhere in town, in a video of the indecent sighted the media where nearly ran over a young boy on the streets while driving out of a yard with his entourage.

Again , Shatta Wale and his two-car convoy and entourage was driving by and Shatta Wale was in his new BMW car which was the first car to drive out of the building , the massive chanting crown of young Ghanaian youth attempted to get him to stop as they are his loyal fans, but he did not stop but decided to move, Then all of a sudden , one of the young boys was nearly hit by Shatta Wale car for the fact that he was trying to get his hand on the moving vehicle.

Although, he fell on the ground and Shatta Wale's bodyguard was able to get him off the ground in a very fast manner, then within a matter of seconds before Shatta Wale's car got there which nearly ran over him and it could be a deadly accident.

From the clips it is not yet known where Shatta Wale was driving to but it looks like he and his team was in a hurry to somewhere and they did not stop after the incident to console the poor young boy.

Niki Samonas Reveals The Category Of People Who Gossip Most In Ghana: You Will Not Believe Number 3