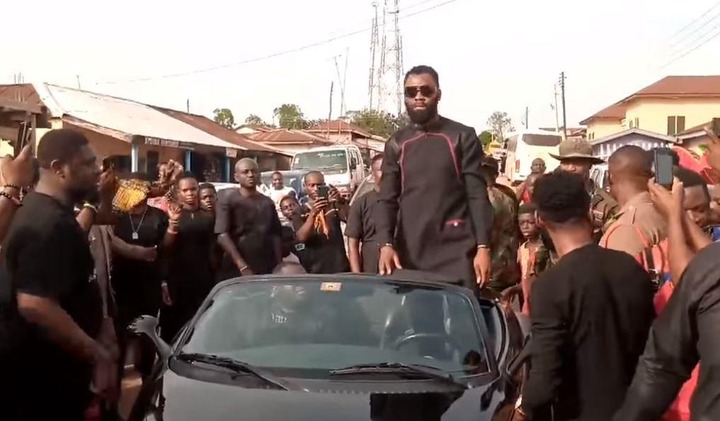 The leader and founder of the Anointed Chapel International, Reverend Kwaku Antwi Agyei who is also known as Rev. Obofour is alleged to have stormed the headquarters of the Criminal Investigations Department (CID) to lodge a fresh complaint against Nana Agradaa.

Nana Agradaa was granted bail after she was arrested for operating two television stations without a license. Her television station was ransacked by a joint team from the National Communications Authority and the Police. She met the bail conditions and was set free.

Soon after she stepped out of the courtroom to celebrate with her followers, another security vehicle was on standby waiting to take her to custody.

In a short video that has since gone viral, Nana Agradaa could be heard assuring her followers to exercise restraint.

According to her, she is being rearrested on the grounds that Reverend Obofour has accused her of insulting him.

“By the Grace of God I’m fine, but they say there is another case. So I’m following them for another case. They say I have insulted Reverend Obofour. I’m going with them to the Police station. I will be fine by the grace of God”. He narrated.

Nana Agradaa was granted a five hundred thousand Ghana cedis (500,000) bail. However, she was re-arrested soon after she thought her freedom has been granted.

According to reports, some personnel from the Police CID headquarters were waiting for her at the premises of the court. Nana Agradaa was marched to the vehicle and was taken away.

Information gathered also has it that, apart from the complaint made by Reverend Obofour, other persons have also reported Nana Agradaa for other offenses.

It is still unknown why Reverend Obofour made the complaint but the two have been at each other’s throat for some days now.

They have made several headlines during a banter. Due to the time Nana Agradaa was rearrested, she might spend another night at the CID headquarters.

Reports further reveal that some persons who have allegedly been duped by Nana Agradaa have also lodged complaints at the Police demanding a refund of their monies. For now, it is unknown when Nana Agradaa will be granted bail again.