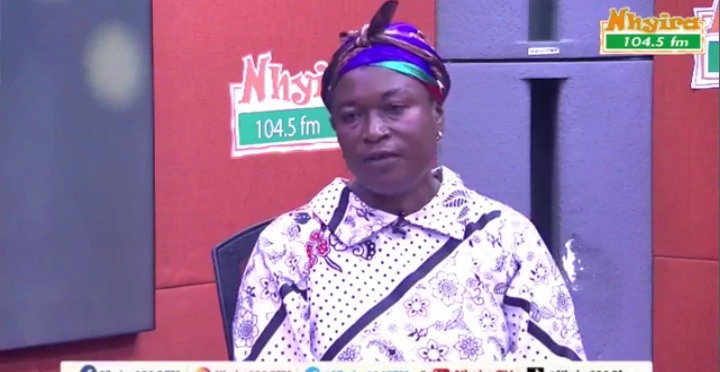 Maame Ama a 35 years old mother of five who hails from Ntonsu Aboaso in the Ashanti region tearfully narrates how her fiancee and his sister beats her up after she came back from work at midnight. The woman detailed that she met her fiancee named Mr. Mensah who is a physically challenged old man after she closed from work one evening. The old man proposed to her and promised to marry her soon.

Although the man has kids who are even older than her but she agreed to marry him. Maame Ama claims she went to stay with him after the old man met her family members and performed her knocking ceremony. The two of them went to stay together with her stepchildren. Life seems good for the couple but Mr. Mensah started accusing her of sleeping around with different men whenever she goes to sell at the market.

One day she returned home from the market feeling tired and was hoping to meet her fiancee in a joyful mood, but the man and his sister began beating her up the moment she stepped into the house at midnight and also sacked her out at that time. Maame Ama added that she packed her luggage and went to her mother's house feeling so sad.

Three days later Mr Mensah called her and he didn't apologize for what he did but rather cursed her to die with her five kids for making a mockery of his disability which is not true. She tried explaining herself to her fiancee that it is just an accusation but he didn't pay attention to her. What worries her much is that her fiancee has got into a relationship with another woman whilst they have not separated. The woman claims she is terrified to die with her kids so she is pleading with Mr. Mensah to forgive her and revoke the curse