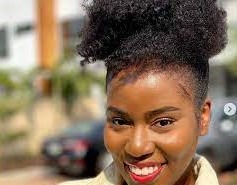 MzVee, a dancehall musician, has made a clear statement to the world about the type of man she would like to marry.

This was revealed by the singer during an interview with ZionFelix.

MzVee claimed to be single and she is undoubtedly eager to date; nevertheless, the man should at the very least possess some traits that would ensure a happy future.

Individuals can apply since I'm eager to meet new people, she stated.

"I'm sorry, but I don't like short males. I find taller men more appealing. Not very tall, but taller than I am.

MzVee recently discussed her previous relationship and what caused it to fail.

The well-known singer said that her boyfriend's jealousy and anxieties caused their relationship to collapse.

The well-known singer said that her boyfriend's jealousy and anxieties caused their relationship to collapse.

When asked if her partner had ever expressed concerns about her music profession, MzVee admitted that her ex-boyfriend first lacked confidence in her musical talent, which ultimately developed into jealousy and insecurity.

MzVee was chatting to Zionfelix during an interview. She remarked that as a performance, she drew guys from all walks of life, including those from other countries. But this attention angered her ex-boyfriend.