By iamnsiahhackman (self media writer) | 4 months ago 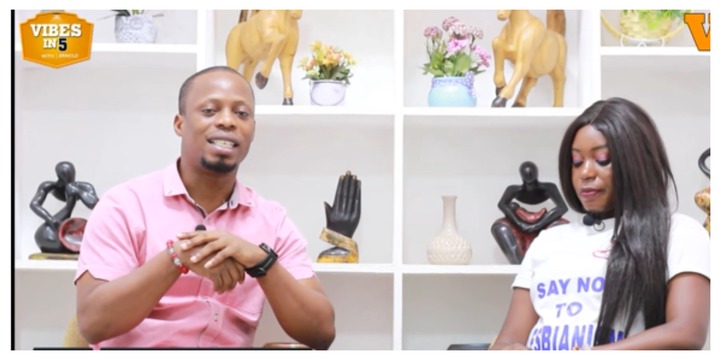 Arnold Elavanyo invited into his hot seat a former lesbian called Bernice Nketiah Hammond, who is widely known as Benny and the kind of revelations she made on the Vibe In 5 show is intriguing.

Benny suggested she was a sex addict to the extent when she dragged herself out of lesbianism and started going out with a man, she still used vibrators even when her man was around.

On sleeping with her son, the young lady said when she saw how big his manhood is, she decided to sleep with him and she enjoyed every bit of it.

Well, to burst your bubble the young man in question is not her biological son but her school son while admitting that she is far older than him.

Also making waves on www.Ghgossip.com, Delay caught ‘E Choke’ star, S3fa unaware during the Delay Show by telling her bluntly that she is aware she has undergone under the knife in the Dominican Republic.

During the interview on the Delay Show, Delay whose real name is Deloris Frimpong Manso characteristically asked the Black Avenue Muzik frontrunner if indeed she has augmented her body with plastic surgery as the rumours flying around in the grapevine depict.

S3fa denied ever going under the knife but Delay put it to her that she went for the surgery in the Dominican Republic and even went ahead to mention the name of the doctor who performed the operation.

The singer whose aforementioned single is unarguably one of the biggest in Ghana now was stunned and confused at the same time after which she forced a smile and denied once again she has gone for butt enlargement surgery.

Content created and supplied by: iamnsiahhackman (via Opera News )