Ernest Owusu-Bempah, the Ghana National Gas Company's Head of Communication, has announced that he will appear on Net 2 TV to retaliate against show host Kwasi Aboagye of Peace FM for denigrating him over views he, the former, expressed on celebrities involved in the #FitTheCountry movement. 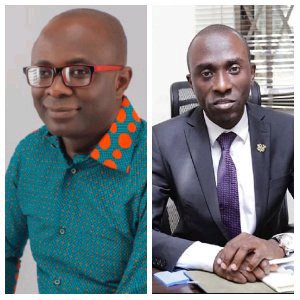 “Owusu-Bempah was asked to appear on the show to clarify his Facebook post which identified celebrities involved in the #FitTheCountry campaign as ‘social misfits' whose behavior can be ‘akin to drunken behavior' and they cannot teach the president how to govern,” Kwasi Aboagye said on his Saturday Entertainment Review on May 8.

Aboagye first brought up the issues on his show on Thursday, but when he called Owusu-Bempah to get his thoughts on the matter at the time, Owusu-Bempah said he was in a meeting. Unfortunately, by the time he returned to the Entertainment Review producers, the show had already finished.

“Since then, Owusu-Bempah has been having a discussion with me and my production team, and he has backed up his discussion with us with messages threatening to fix me on Net 2 TV because I have encouraged my panellists to express their views [on his post], which he considers [...] offensive,” Kwasi Aboagye recounted.

“We asked you to come today [Saturday] to tell us your side of the issue because we couldn't meet you on Thursday,” Aboagye continued, “and he said he won't talk and if I mention his name on-air, he will take me to court.” I'm citing your name, Ernest Kofi Owusu-Bempah, Ghana Gas Communications Officer - sue me in court.

He has also called my boss, Father Dickson, and threatened to sue Kwasi Aboagye if he mentions my name. Even though Despite Media's management chooses not to provide me with legal representation in court, I know lawyers who are able to do so.

Did I tell you to go ahead and post that on your Facebook timeline, threatening to sue me? I wanted to study law because of people like Owusu-Bempah.”

Aboagye went on to say:

“You give me messages telling me I should watch it, but I have an agenda, so you'll go fix me on Net 2 TV, and I should be shivering. Go on Net 2 TV and say whatever you want about me, but if I find it defamatory, I'll sue you as well.”

Some disgruntled Ghanaians started the #FixTheCountry social media movement to vent their frustrations over successive administrations' inability to improve the lives of the people.

Tens of thousands of posts have been made on social media, mostly by teenagers, highlighting some of these inadequacies.

“This is the right time for us to stand up as one people and speak up and tell them [government] that we are tired,” Joshua Boye-Doe, a social media consumer and the #FixTheCountry campaign's initiator, said.

The advocates claim that the problems in Ghana have made their lives difficult due to corruption, erratic power and water supply, and other factors.

For at least a week, the hashtag #FixTheCountry has dominated social media trends and conversations, making many government appointees, including Owusu-Bempah, uneasy.

“The temerity in which some so-called celebrities dabble in politics in this country amazes me at times,” Ernest Kofi Owusu-Bempah Bonsu posted on his Facebook timeline. I can't seem to get my mind around it. I've been resisting the urge to join in with these self-proclaimed comedians who dabble in social media politicking.

“Why do these ‘entertainers' think anyone cares about what they think?” he continued. Of course, this is one of the drawbacks of social media: people with low IQ who can't read or understand English try to show the president how to rule. Attrition and patronage politics aren't going to favor these social misfits and their backers.”

“President Akufo-tenacity, Addo's dynamism, organizational savvy, and political savvy are changing the game, and he is repairing both a pandemic and a nation. Covid-19 has continued to wreak havoc on our beloved country, as well as many others around the world. It's a method, and the president is carrying out his duties despite the difficulties we face as a country.”

“The noise created by these so-called celebrities is analogous to drunken behavior,” he added.

“Apart from their false social media lifestyle and live on borrowed glory, what exactly have these celebrities fixed on their own? Some of them can't even care about themselves, much less repair their drab life. They borrow money from people to finance their deception, and some of them are in debt and unable to handle their lives, and they scream at politicians?