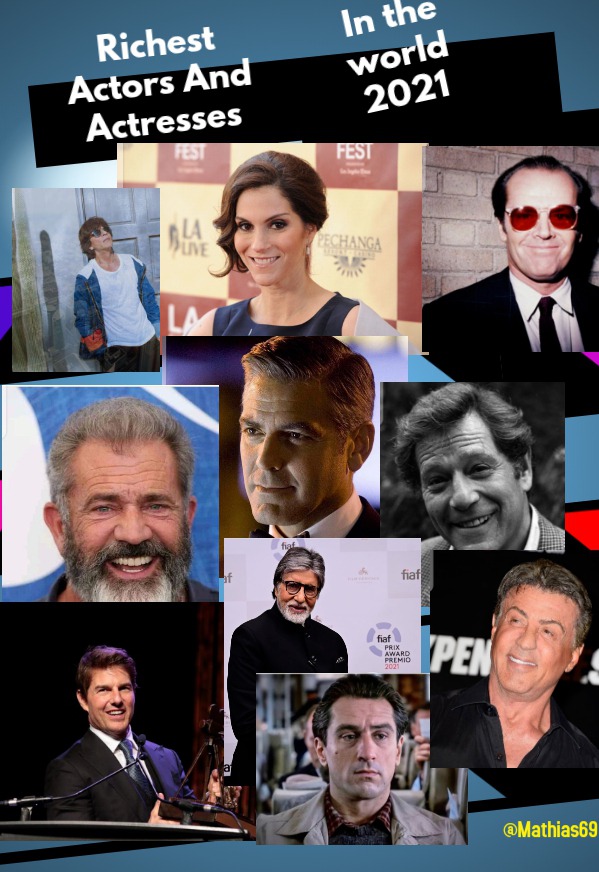 Sylvester Stallone is a blockbuster and American actor. He made two of the biggest movies of all time that generated nearly $4 billion. Stallone is indeed one of Hollywood’s highest paid actors. We all know him from the film Rambo.

Jack Nicholson is also an American producer, writer, and an actor. We have known him from the films The Cry Baby Killer, The Raven, and The Shining and interesting films. He has featured with some of the best actors and actresses in the industry.Hope you watched the Joker too.

Amitabh Bachchan is one of the few people who has made their mark on the India film industry. The wealth he amasses makes him to one of the richest Bollywood stars of all time.

Today, he sits on the list as the 6th richest actor in the world as of 2021 with a net worth of $400 million dollars

Adam Sandler, also an American actor and film producer, who is sometimes referred to as one of the highest earners in Hollywood and his work behind scenes says it all.

Sandler became popular when one of his movies brought in whooping $271 million at the box office. The movie made it Sandler’s top-grossing movie.

And as of 2021 his net worth is around 420 million dollars earning him a spot on the list.

Mel Gibson is a film director, producer, and actor from New York. He is known for his directing and performances in movies such as The Passion of the Christ, We Were Soldiers, and Braveheart which he received an Academy Award and Golden Globe in 1995.

And today he's one of the richest actors in the world with a net worth of 425 million dollars.

Robert De Niro is an actor loved by many, for both his past and present work. Recently, he’s starred in films such as Meet the Fockers, Meet the Parents, The Intern, and Dirty Grandpa.

However, in his early days, you might remember him from Goodfellas, Analyze That, The Godfather Part II etc.

His net worth is said to be around 500 million dollars.

George Clooney, an American actor and director from Kentucky. He has won several awards for his performances in Syriana, Ocean’s Eleven and Three Kings. Clooney has received success in multiple areas, and it has not gone unnoticed.

He's 4th on the list and with a net worth of 500 million dollars.

He received several awards for his movies, among other accolades.

Tom Cruise is an American producer and film actor from New York. He is one of the best actors of all time. His movies have sold millions worldwide.

As of 2021 his net worth is estimated to be around 570 million dollars making him 3rd on the list.

Shah Rukh Khan is an actor from New Delhi, India. He is mostly known as “The King of Bollywood”. With his numerous Hindi movies, he has received plenty of awards for his performances.

Today Khan's net worth is 600 million dollars making him one of the richest actors in the world.

Jami Gertz is an American actress and investor, known for her early roles in films including Crossroads,Twister, Less Than Zero,Quicksilver and The Lost Boys

Although she’s not achieved the levels of success many of the other actors on this list have; Gertz is a part-owner of the NBA team, Atlanta Hawks, with her spouse. Which is the reason for her net worth being so high.

Her net worth is estimated to about 3 billion dollars and is indeed the richest among the actors and actresses in the world. 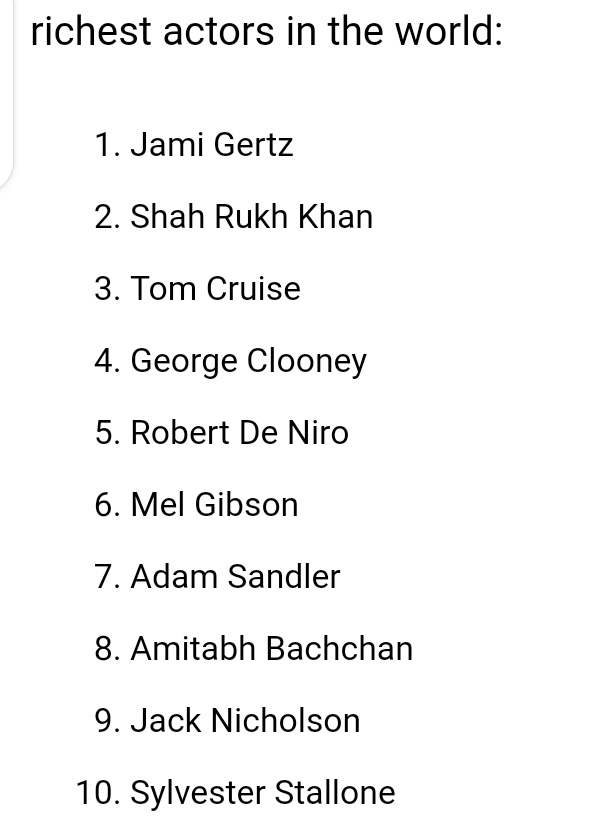