If There Is Selectivity And Chaos In Town, What Should Gov't Do?- Randy Abbey Quizzes

By Famous_News (self media writer) | 6 days ago 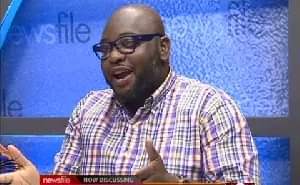 NCA stands to give some media houses opportunity to operate in the country again has brought a lot of discussion amongst the general public.

Nana Fredua Agyemang Ofori Atta speaking on Metro TV good morning Ghana show today stated that he does not have any problem about what NCA did but he may ask that, what is national media commission going to do about the amount of debts owed by those media houses before its closure?

Nana Fredua Agyemang Ofori Atta said that there's chaos in town and Ghanaians are divided about the approval of some two media houses and said some people seems to say that there's selectivity in the closure of those media houses.

Randy Abbey brilliantly questioned him that if he is saying there's selectivity and chaos in town, what should government do about that as they are moving forward?

Randy Abbey first of all told him that there's selectivity in the closure of some radio stations as Oman Fm was left behind when it's expected to be close down but Nana Fredua Agyemang stated that, all the media houses were giving opportunity to reapply as Oman Fm did so they should blame the rest of the media houses for not complying with the laws.

Nana Fredua Agyemang Ofori Atta responding to Randy Abbey's question stated that government should educate the various media houses to go to the right sources for their license instead of following Politician who will create problem for them later.

He however admitted that the various Radio stations being closed down is as a result of Political influence and advised that media organization should stop approaching Politicians to help them acquire license for their Radio stations.

Daily Intake of Most Seed Oils Is Dangerous To Your Health, Experts Advice

LPG INCREMENT: Prices of Gas Shoot Up By ₵0.40 Per Kilogram Today After Government Take Off Levies.

Help Us Find This Man: He Killed My Sister By Hitting Her Head On A Tree: Man Drops Tragic Account