I sometimes wonder if there is a difference between a notable person and an ordinary person because some ladies are quite humorous. You might argue that the distinction is that one is noticeable and the other is unremarkable.

Although there isn't much of a distinction between them, it is remarkable how they are sometimes revered as gods. Why should you fight over a soiled, dripping towel? After reading the following, you will understand what I'm trying to express.

Two slay queens can be seen fighting in a video over a sweaty and dirty towel thrown at them by Wizkid, a Nigerian rapper. The incident occurred during the Grammy-nominated singer's performance during a recent concert.

Wizkid was seen wiping sweat off his face with a towel while performing. After finishing his duty, he wrapped the towel and tossed it into the crowd. 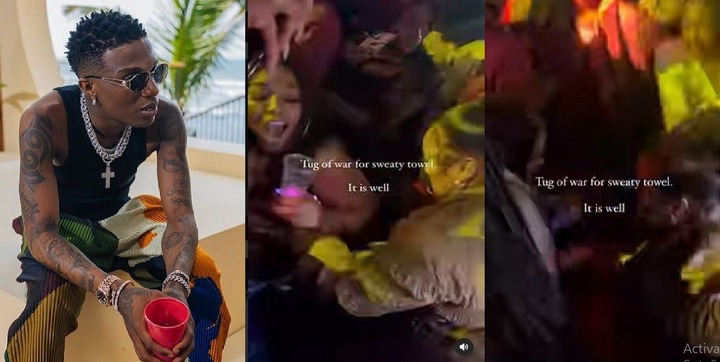 The towel landed straight on two slay queens as neighbors leaned out to reach for it, which worked out well for them. They clutched both ends of the towel, unable to let go so the other could take it.

The otherwise peaceful performance degenerated into a battle as the two stupid slay queens fought over who would take home the dirty towel.

Many Nigerians criticized the slay queens on social media. Some people even speculated on what they would have done if they had been in the shoes of the slay queens.

Wizkid grabbed a die-hard fan's phone and recorded himself giving her a shout-out at the same show.

The superstar requested the phone number of a woman who was attempting to videotape him performing songs from his Made in Lagos (MIL) album in every detail.

He then instructed the DJ to turn down the music and began a conversation with the audience while simultaneously recording himself on the fan's phone.