They Confiscated My Car And Gave It To His Girlfriend: Captain Smart Painfully Reveals 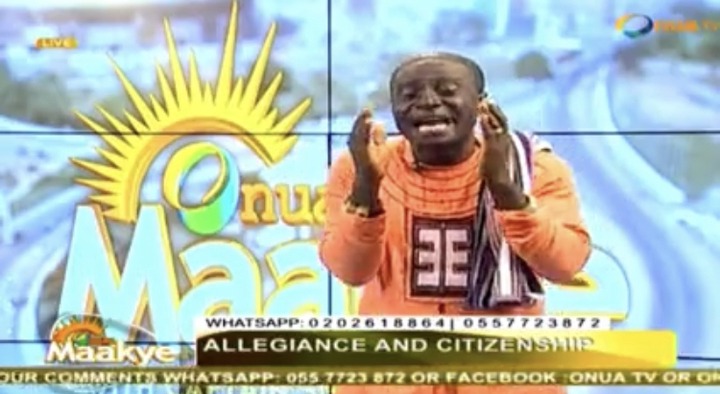 Captain Smart is well known to be a very hardworking journalist who puts all hands on deck in order to achieve success wherever he finds himself but as the saying goes, life could be sometimes bitter no matter how hard one tries to make things right.

Speaking on the most anticipated show on Onua TV and Fm, the seasoned journalist took the privilege to share another painful ordeal that saw him lose his car to a prominent person’s girlfriend whom he didn’t reveal their names.

According to Captain Smart, he imported a VW Tuariq car from overseas after which it was unexpectedly confiscated on its arrival at the Ghana port.

Captain Smart highlighted that, the car was confiscated for about 2 weeks at the port during the tenure of the KMA boss, Honorable Samuel Sarpong who later became the Ashanti regional Minister.

The popular broadcast journalist added that, He later confronted Dr Richard Anane who was a friend of Honorable Samuel Sarpong in order to contact him for the release of his car but all efforts were futile.

“They confiscated my car at the port and gave it to his girlfriend. The name of the car at that time was VW Tuariq. They confiscated it for 2 weeks, the KMA boss at that time was Honorable Samuel Sarpong. He later became the Ashanti regional Minister. I went to Dr Richard Anane in order to get in contact with Honorable Samuel Sarpong but he never responded. They later gave my car to someone’s girlfriend”, Captain Smart emphatically stated.

Sadly, Captain Smart recounted how the car was later given to a prominent Ghanaians’ girlfriend after which he was offered another car which he highlighted that it was a Crysler.

“I was later given a Crysler and was expected to pay Ghs 5000 but I rejected it”, Captain Smart emphatically added.

Captain Smart unexpectedly stated that, he rejected the car because he wasn’t ready to pay Ghs 5000 as a fee for the car.

In conclusion, Captain Smart unexpectedly revealed that, his best friend also encountered the same problem at the port where his car was also sold at a lower price to another lady.

Do you think it was right for Captain Smart’s car to be confiscated and later given to someone’s girlfriend?

Has you or any of your relatives encountered such challenges at the Ghana port?