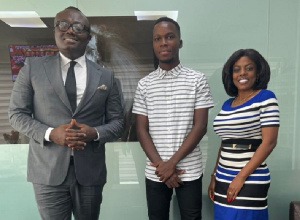 Journalist Albert, the young man described by broadcaster Nana Aba Anamoah as a frequent cyberbully, has been offered employment by the EIB Network, according to reports.

Albert is currently a staff member of GHOne TV, according to Caleb Nii Boye, a producer and host of ShowBizonStarr.

Caleb remarked in a tweet dated November 17: "The meeting is over. On Monday, @BongoIdeas1 will begin working for @GHOneTV."

During his audition, the young man in question was insulted by judges Bridget Otoo, Serwaa Amihere, and Nana Aba Anamoah of 'The Next TV Star.'

He was identified as the user of a Twitter account known for mocking celebrities such as GHOne TV's Serwaa and actress Lydia Forson.

Nana Aba dared him to say the 'crap' he's been spouting on Twitter to her face when he faced the judges.

The young man claimed that he was chased out of the studios and labelled a thief while giving his account.

Journalist Albert also revealed that he had lost his job as a journalist for GhBase, a news website.

"Today, I met @TheRealBolaRay and @thenanaaba, and they gave me a second chance. With the help of @EIBNetworkGhana, we're launching an anti-bullying campaign called #AntiCyberBullying "In a tweet, Albert said.