By Tyc_medià (self media writer) | 6 months ago 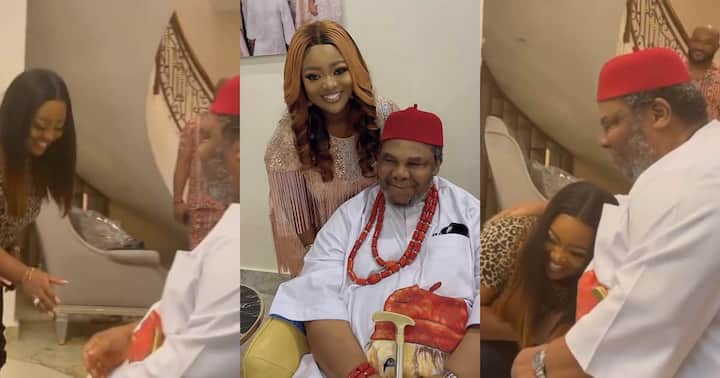 Jackie Appiah, an award-winning actress, recently met legendary Nigerian actor Pete Edochie. They met on the set of a film. Jackie was filled with admiration for the legend. Jackie is currently in Nigeria as part of the cast for the upcoming film Merry Go Wrong, which also stars Edochie, Destiny Etiko, and Nkechi Blessing.

Edochie can be seen interacting with one of the actresses on the set of the star-studded film in one of the behind-the-scenes videos. After the brief conversation, he sat down on a couch. Jackie then enters through a nearby door and walks straight to where Edochie is sitting. Jackie kneels down to greet Edochie, demonstrating her deep admiration for him. He smiles as he pats the actress on the back in the manner of a father.

Chidi Chijioke, the film's director, posted the video on his Instagram page:

Jackie was later seen posing with the legend after going to greet him. Jackie had changed her previous outfit in a photo posted on her Instagram page.

She smiled as she stood behind Edochie. Jackie commented on the photo, saying that Ghana had met Nigeria and that she was on the set of a new film. She stated: "Nigeria and Ghana collide. On the set of Merry Go Round."

The images of Jackie and Edochie's meeting elicited numerous reactions from social media users and other fans of the two.

Some of the responses are as follows:

"My Queen with the legendary," luchydonalds said.

Content created and supplied by: Tyc_medià (via Opera News )