Who had the biggest Christmas Event in Ghana? Stonebuoy, Shatta, Samini or Sarkodie: the analysis

By JUKELAFRICA (self media writer) | 7 months ago 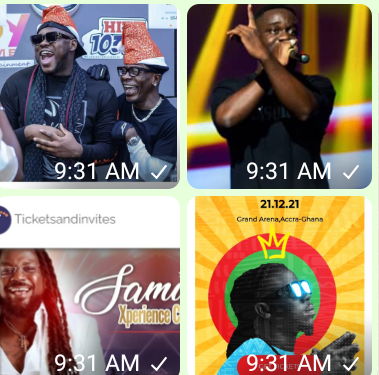 Let's objectively scrutinize the Christmas shows and critique them based on turnout, lighting or sound or instruments, trends, ticket prices and impressions created in the minds of fans. So who carried the Season?

The first on the list is the BHIM concert that trended locally and internationally . Stonebuoy actually represented Ashaiman properly on the map . His show had some great celebrities to spice up the show. A notable of these are Samini, Hajia4real, Mzvee and Gifty Adorye. It should be highlighted that Stonebuoy's BHIM concert was held on 21st December, 2021 with a touch of Beenie man, the internationally celebrated Jamaican dance hall musician . The tickets charged for the event ranged between 300ghs to 500ghs. The show was held at the Grand Arena, Accra International Conference Center( AICC). The show attracted both local and international music patrons or music lovers . The show is credited to have chalked tremendous success. The organizers of the Bhim concert made it so easy to buy tickets online and this is commendable. Technology at its best use! Attendees were very excited about this year's BHIM concert. Well done Stonebuoy!

Secondly, the Samini experience gave fans the opportunity to enjoy the dance hall icon. Fans could easily purchase tickets online via the show's website. Technology at its best use. Programme was well organized and tickets priced from 100ghs for "standard upgrade" to 10,000ghs for " legend table". Ghanaians admire Samini, the originator of Africa dance hall music. Ghanaians are so excited of Samini's entry to the show .The Prisons brass band team played so well on the night ; from playing an intro gospel music to the popular '' linda'' track . The show was well organized and attendees had value for their money! Samini experience on 24th December, 2021 at the Grand Arena was so awesome. There were huge artistes on the stage such as K.K.Fosu, Kidi, Kuami Eugene and other great Arts .

Sarkodie had a great time on stage on the 25th December after tickets were sold out ranging from 150ghs to 400ghs. The Rapperholic 2021 event is a popular show. It was well organized, made use of a designated website to sell tickets . King Sark did amazingly to inform fans about the covid 19 protocols via his social media . Congratulations to Sarkodie on how his show was organized at the Grand Arena on the Christmas day with the notable presence of Obrafour and Black Sherrif .

. Tickets were sold at the gates at 10ghs to 20ghs on one night. It is a great achievement for a Ghanaian artiste to sell 40,000 tickets to Ghanaians in one day. Shatta has so much admiration for the youth and he actually prayed for his fans during the show . He actually mentioned at his show that , he pulled the fans without including any international arts or ''Nigerian artistes ''. He explained that his objective for the night was achieved and he had pulled the highest number of fans for any Ghanaian event. Shatta Wale has reached out to his fans even after the Show and he has remained extremely grateful to them . A recent post from Shatta was to quote that " the stone that the buiders rejected has become a corner stone . We agree entirely with Shatta that he organized his programme well in all stages ; before, during and aftermath. He has shown gratitude to his fans louder than any artiste in Ghana ! Congratulations Shatta

All four artistes seem to say that ''I had the biggest Xmas Show''. The question is who actually won ? Your choice may be the answer

Based on the Christmas events organized by the four huge artistes, who do you think had the best day?

Keep following me. Kindly like, share or comment on this article. I need to know who won based on the success of the events. Please provide feedback if you enjoyed this article.