I regret the day I met my white husband from Chille, the sad story of a young woman 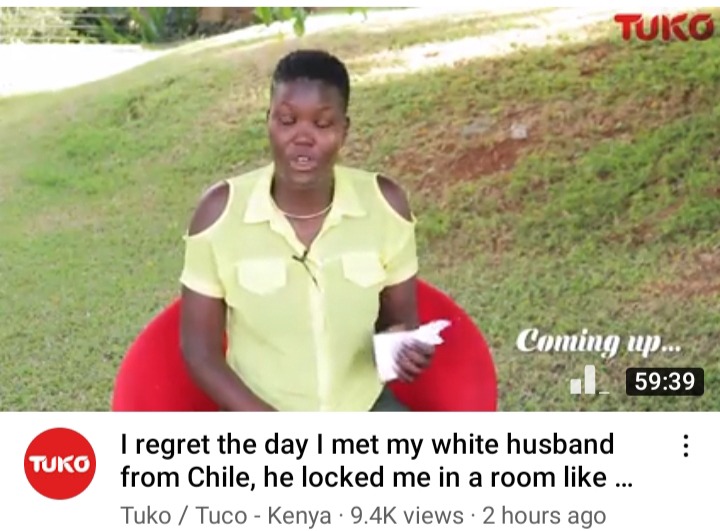 A young woman called Veronica Achieng Abok from Kenya was working as a waitress when she met Mannuella Rodrigues who is also from Chille and she fell in love with him.

At first he gave her everything she need. He used to send her dollars and everything was going on well with her. Veronica's parents who were living at Kibera were very happy and they advised her to date the foreigner. She then quit her job and went to Chille to stay with her newly found man.

She had no idea that her life would never be the same again. When Veronica got to the airport at Chille, she waited for almost four hours before her boyfriend arrived to picked her home. Mannuella was happy to meet her but when they got home, his mother didn't even say hi to her. Her boyfriend's mother acted weird with her, she didn't want Veronica to touch anything in the house.

Veronica then asked her boyfriend to lend her his phone to contact her family that she has arrived safely but he refused. She was not allowed to talked to anyone in the house. Mannuella prepared everything about their marriage but he didn't inform until the day that they were getting married. He told her that when they get married his mother's attitude towards her will change.

After the marriage things even got worse. There was a time that her mother- in-law slapped her but when Mannuella came home and she told him about it he didn't even listen to her. Her mother-in-law then started attacking her physically that she told Mannuella she tried to steal money from the house which was not true but her husband didn't even listen to her explanation.

So after the incident Veronica insisted that she wanted to go back to Kenya. Then her husband apologized to her and told her that it will not happen again. The next day he sent her to the beach but when they got there he tried to drown her. She became angry but that time too she had not eaten, so she was weak and she collapsed.

Mannuella told her that he was going for an ambulance but he didn't come back again so it was those who were around took her to the hospital. He didn't come to the hospital until the following day. There that she found out that she was pregnant. She was discharged and he took her home. So when they got home she told her husband that she wants to go back to Kenya but Mannuella told her that then she had to buy her own tickets.

What even hurts her was when they threw her out of the house and they locked her up in a room. She then apologized to her husband to let her go back to her family and he agreed. He bought the ticket for her and sent her to the airport. He didn't even give money but finally he got home safely.