By JUKELAFRICA (self media writer) | 3 months ago

Kindly click on the +follow button at the top right corner to receive more exciting articles on daily basis. 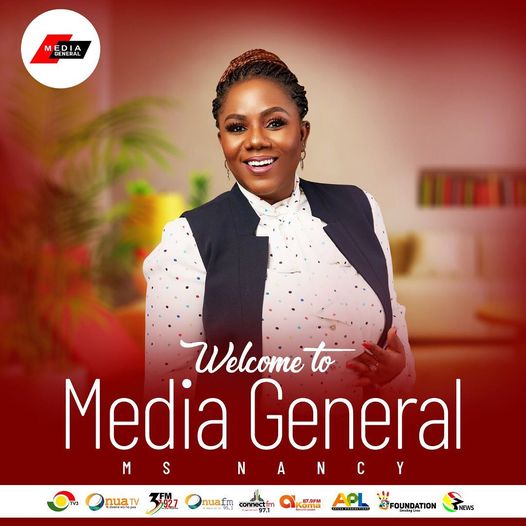 Miss Nancy, whose real name is Nancy Adobea Anane, has joined Media General. She was previously the host of GH One's Diva's Show and has received more accolades for her diction, choice of tone, dressing style, and professionalism.

Born on 26th March,1982, Miss Nancy was working at the Brands and Events office at Starr103.5FM in Accra and hosted the popular , DUVET show .

She is also a proud image projection and personal grooming consultant due to her passion to transform lives and also adding value to many persons who need their confident boosted or want to stand out and not mix in, or better still want to move with extreme grace and style . Ms. Nancy attended St. Monica's Senior High School and Institute of Business Management & Journalism to study for a Diploma in Journalism and Marketing. In fact, her interest in broadcast journalism, precisely in radio, began after she graduated from the Institute of Business Management & Journalism.

Miss Nancy also got some formal education at the Style Coaching Institute in the United Kingdom where she was equipped on how to advise people to always go for quality instead of quantity when they set out to shop for clothes and accessories.

Many do not know that she was a Chaperone and personal "groomer' for Tv3’s Ghana Most Beautiful in 2014 but she started as a radio presenter with Invincible FM in Kumasi for a decade and later joined Ohemaa Magazine in the US as a West Africa representative.

Miss Nancy later joined EIB Network, Ultimate FM in Kumasi as a Presenter and was recently the host of DUVET on Gh One TV in Accra until she moved to Media General. The 40-year-old beautiful presenter is popular for her relationship and sex talk show, DUVET. Many of her fans are requesting Media General to pair her with Date Rush Host Giovani Caleb and Anita Akua Akuffo on any relationship show. Many believe her sense of humor was the main reason why she excelled at delivering her DUVET SHOW.

Many are asking why Ms. Nancy left GH one to join Media General . Even though she has not "let that cat out of the bag' , we certainly know that is a career advancement move that any one would desire because she worked at Invincible FM before joining EIB Network and of course , she has contributed her quota . The reason Miss Nancy left GH One is the same reason coughed out by her GH one mates like Giovanni, Cookie Tee, Berla Mundi and Anita Akua Akuffo. She joins former four GH ONE colleagues who are now with TV3 or Media General. This is a great step in a direction that would bring so much fun on the broadcasting stations of Media General since she knows her former colleagues so well and that bond can shoot her to another level .