NAM1 defends himself on social media after #FreeAkuapemPoloo dragged him

By ebenezera (self media writer) | 9 months ago

- NAM1 has responded to a viral hashtag in the aftermath of Akuapem Poloo's conviction and impending sentencing.

- He claimed that there was no link between his case and that of Akuapem Poloo.

- He also stated that he was acquitted and discharged in a foreign country, and that he pleaded not guilty in Ghana.

- His remarks come after insinuations on social media about why he was walking free while Rosemond Brown was being convicted.

Nana Appiah Mensah, the Chief Executive Officer of Zylofon Media and the defunct Menzgold Dealership, also known as NAM1, has reacted to a viral trend that has dragged his name along.

Recently, it was reported that actress Rosemond Alade Brown, also known as Akuapem Poloo, had been convicted after posting a photo of herself in her "birthday suit" while kneeling in front of her son on social media.

NAM1 defends himself on social media after #FreeAkuapemPoloo dragged him 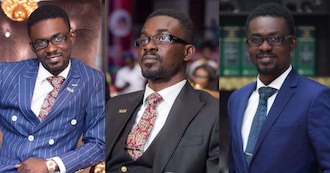 NAM1 defends himself on social media after being dragged by the hashtag #FreeAkuapemPoloo.

This development got many social media users up in arms and dragged many people including NAM1 into the matter with the insinuation that Akuapem Poloo's act could not be compared to some acts done in the past.

In reacting to this assertion, which led to creating a viral hashtag #FreeAkuapemPoloo, the businessman took to social media to have his say.

This development infuriated many social media users and drew many people into the controversy, including NAM1, with the implication that Akuapem Poloo's act could not be compared to previous acts.

The businessman took to social media to respond to this assertion, which resulted in the creation of the viral hashtag #FreeAkuapemPoloo.

According to him, he was acquitted and discharged of all charges brought against him on foreign soil, and he also pleaded not guilty in a Ghanaian court.

He added that he was still going to have his day in court, so dragging him into Akuapem Poloo's case was pointless.

"Stop Misleading the Public. Even on a foreign land, I was acquitted and discharged, a decision that was affirmed by the Appeals Court and the Supreme Court. FYI: my granny wasn't the presiding judge. Back home, I pleaded NOT GUILTY and I'm having my day in Court," NAM1 wrote on Twitter. 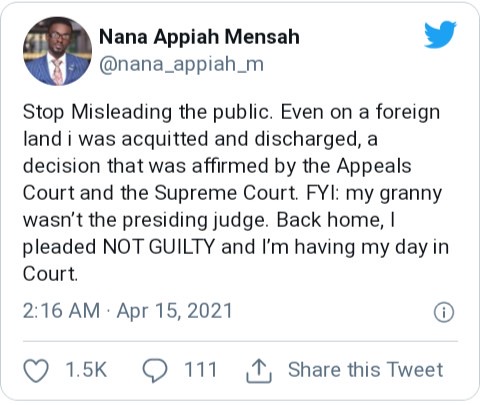 Many of the embattled businessman's supporters took to the comment section to express their support, while others sided with him in response to his opinion.

In solidarity and support of an industry sister, the singer used the hashtag #FreeAkuapemPoloo in a Twitter post.

Efya's reaction and support come after reports that Akuapem Poloo had been convicted pending sentencing after posting a birthday suit photo with her young son.

Content created and supplied by: ebenezera (via Opera News )