By Reginald10 (self media writer) | 9 months ago 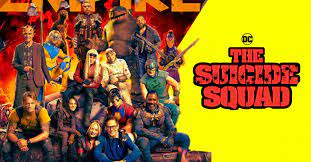 The Suicide squad movie is an upcoming American superhero film based on the DC Comics team of the same characters. The movie was written and directed by James Gunn, and included cast such as John Cena, Idris Elba, Margot Robbie, Sylvester Stallone, Viola Davis, Joel Kinnaman, Jai Courtney and Peter Capaldi. In the movie a task force of convicts are sent to destroy a Nazi-era prison and laboratory named Jotunheim, where political prisoners were held and they were being used for experiments. In the comic, Jotunheim is an old Nazi lab in the fictional country named Qurac, and a terrorist organization named Jihad took over the lab in one key Suicide Squad story. The Suicide Squad team splitted into two teams, the first team got stranded on Corto Maltese with the and second team sent to backed them up because Amanda Waller thinks they are out of their depth. There has been a rumours that The Suicide Squad will feature Starro, a monstrous creature from the comics. Well it is possible that Starro was either held or was being experimented at the Jotunheim lab, again it was revealed that Starro was not the enemy but rather an ally. I guess we are all waiting to see what will happen when the final film is released. Suicide Squad is set for release in August 2021, how will you feel to see the Great John Cena, Idris Elba and Sylvester Stallone in a single movie, well if you ask me I will just say it is perfect.

Content created and supplied by: Reginald10 (via Opera News )