By joe_baby (self media writer) | 5 months ago 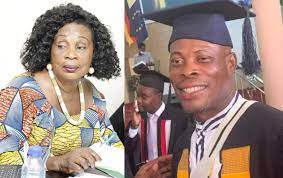 He reportedly passed away that tragic afternoon between 1:00 and 2:00 pm after being taken to the 37 Military Hospital the night before.

Popular actress Grace Omaboe, also known as Maame Donkor in the entertainment industry, spoke at the one-week observation of actor Waakye. She publicly refused to stop talking about the shortcomings of Ghana's health system, which she believes significantly contributed to the actor's death, despite an unidentified person being seen whispering in her ear to stop.

She screamed indignantly, "Why...why... why?" I will speak at length about it. How can a sick person spend four hours in a taxi? Why won't you let me discuss it? Check with the 37 Military hospitals, and if you find out I'm not speaking the truth, come and murder me.

Maame Dokono continued to describe what occurred to Prince Yawson in his final hours on earth in a viral video.

"It took the intervention of some cast of Obra to plead with certain patients who had already admitted to giving up their beds before he was attended to," she continued. He had spent more than four hours in a taxi in the meantime.

Waakye allegedly cut his forehead while sleeping at night after falling from his bed, Maame Dokono said once more.