By OEntertainment (self media writer) | 5 months ago 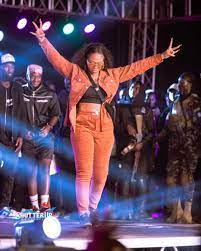 Michelle Diamond known in the entertainment industry as Michy says that her sign at the just ended “Ashaiman to the World” Festival was a sign  for unity.

She performed with Nautyca, whom she has several songs with  and  was a part of the of the artiste to perform that night.

After her performance, Michy raised her two hands up and held her ring fingers down with her thumbs up, which is Shatta Wale, her ex boyfriend’s famous sign.

Michy explained in a radio interview that, the sign is a symbol of hope, and was created and possibly promoted by Shatta Wale.

“This gave some spark to what I had done. It wasn’t planned, it was an impromptu feeling.”

“I move by intuition, I move with what I feel inside my body.

“It wasn’t planned, I don’t know why I put it up but if that’s what will make everybody know that love is love, and there’s no need to fight [then so be it]. We need to collaborate and progress. In this industry, we need each other. Why are we here fighting?” she said.

Supporters from the camps of Ghanaian dancehall stars Shatta Wale and Stonebwoy are famous rivals and until recently, the leaders of both camps had been sworn enemies, the climax of their tensions being the gun incident at the 2019 Vodafone Ghana Music Awards.

Michy, who has a son with Shatta Wale, said “someone would think I was in enemy territory” at the ‘Ashaiman to the World’ concert but “No! I combined and collaborated the two of them, whether they liked it or not.”

Throwing the ‘Wale Sign’, however, she was “shocked at the number of hands that went up with the symbol because that was a Bhim show and there were SM fans there.

Citing the touted cohesion amongst Nigerian creatives, she asked, “Why are we here going against ourselves? And I am not blaming Shatta and I’m not blaming Stonebwoy, it’s a character. Somebody must show that it’s okay to be on good terms with everybody, especially for business sake.”

To Michy, it was not a matter of Shatta Movement (Shatta Wale fans) being at a Bhim Nation (Stonebwoy fans) concert.

“The thing is, the fans from both camps are the same,” she opined.

She compared the crowd to political rallies where people go to take “paraphernalia and food” despite their open or secret political affiliations or beliefs.

“So instead of us working against ourselves when we are the same people, we might as well join. Like the local broom, we can’t function apart as separate sticks; we need to be together to be effective,” she encouraged.