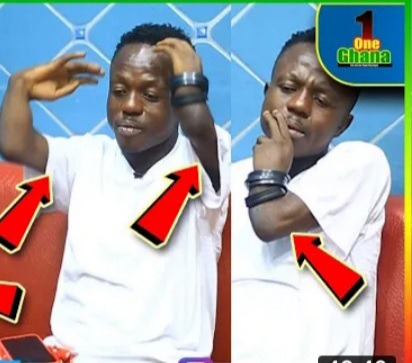 Minister Nana Prempeh who is 25 years old and he is a gospel singer narrates his life stories and what he has gone through due his disability. According to Minister Prempeh, he was born with this condition, his hands were not strong enough pick anything so his parents sent him to Koforidua hospital in the Eastern region for treatment.

The doctors did surgery on his hands so that the hands will become strong. After the operation, boils too developed on the hands which was operated and it started rotting, Minister Prempeh was sent back to the hospital but unfortunately for them the doctor who did the surgery was not in the hospital, they were told he has travelled.

His father used a saw knife to cut the bandages from the hands because there were a lot of people in the hospital so they could not get any doctor to attend to them. He again got measles which made his parents suffered a lot, he was always kept indoors. Nana's hands were still not strong so he started going to school at the age of five, when he got to Senior High School, he almost lost hope because the students always look at him which makes him feel bad.

He later decided that he is a star that is why the students have been looking at him like that. After Senior High School, he got good grades but due to financial problems he was not able to further his education. Nana was a footballer and goalkeeper too this made him very popular at school. He was part of a disability football association, they were supposed to travelled abroad but he didn't get money to do his passport and all his friends went abroad leaving him behind.

Nana started singing gospel songs about a year ago and now he is making preparations to come out with an album. Minister Prempeh said he gave her mother a gift on mother's day and the woman started crying, she told him that people advised her to throw him away when he was a child. Those people even told them that Nana will become a burden to them. She did not listen to what they said but was hoping that his son will become a great person.

You can watch the full video through the link below: