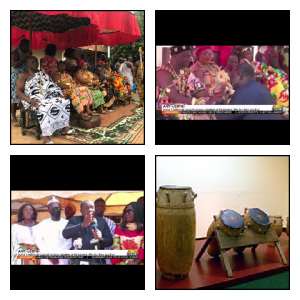 Today, drums are mostly used for a major purpose of creating music. The music carries an infectious rhythmic beats that readily invites people to the dancing floor. Hardly do we get the message relayed by the drum in modern music - being they our Ghanaian High life, Hip life, Reggae, Jazz, and what have you. Even those traditional drums we summarily call _Fɔntɔnfrɔm/Fontonfrom_ (talking drums) belies the purposes for which they're found in some places, such as the Church. They're ultimately played to entertain the congregants, and the dance moves the faithful rise up to its beats is not different from what we see on concert floors. It replicates itself at funeral grounds too.

Unlike today that the availability of mobile telephony, internet and information centres aides in carrying an important message across to the citizens through sound, drums served such purposes in the olden days. 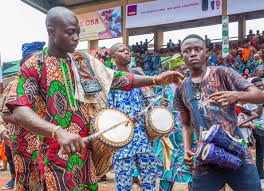 Amongst the Bono people, example the Suma Traditional Area, talking drums were arranged miles apart, and drummers sent information across to the people in sequence.

So, if the chief drummer first beat his drum in front of the Suma Ahenkuro Atuoni palace, the same sound (information) is carried by other subchief drummers planted at vantage points such as Asiri, Jankufa, and Goka, all in the paramountcy, and are relayed to the indigenes.

Even when the drums were played at durbar grounds, it carries a message that's understood by those it'd been addressed to.

For this reason, the Bono people say: "if you forget about the sound beat of the drum of your hometown chief, you find yourself lost at a durbar."

There are still existing Bono cultural displays that have drums communicating to the people in the open. And it's a sight to behold.

During the annual Suma Akwantukɛseɛ (festival), these neatly costumed chief drummers are seen in their best, and when possessed by the spirit of drum, their sticks never repel on the skin that covers the wooden barrel that serves as the drum.

They play for Aboma and Kete dancers. The dancers must enter the arena barefooted, and their clothes brought down to their loins.

You'll be surcharged with a hefty fine if you flout these rules.

And in the case of Aboma, if one dances well and deserves commendation, sand is fetched from the ground and smeared on their bare backs. Who cares about the dirt, it's even an honour to go home with your whole body clothed in sand, such is a trophy you've received thus. 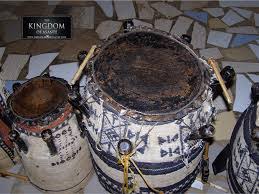 If they're chiefs - local branch chiefs or Paramount chiefs, they are allowed to dance in their full regalia with their _Ahenema_ or Native Sandals still on.

The drummers order the steps of the dancers, and questions are posed to them.

The dancer is asked of his or her family lineage, the position held in the community, and the important personality they lean on in times of difficulty.

All these, the dancer must act to perfection, and those folks looking on understand the communication between the drummers and the dancers.

If the dancer happens to belong to the _Abrafoɔ_ or black-face sword wielding executioners, they do _Sɔpɔ,_ pointing their index fingers to their right cheek whilst their tongues are brought from the mouth on the left side to mean their role played in how one is pierced in the cheek to impale and tame the tongue from uttering a word during sacrifice.

The chiefs will rather throw their hands left and right, then turn round, and gather both hands on the chest, to mean: "the north, south, east, and west belongs to me."

There have been times as the drums are used to score personal points. If one is having a word to tell a powerful ruler, and he can't do so in person, that could be done through the drummers, and the message will get through.

The drummers are poetic. And they carry their message through proverbs.

Not long ago at the Suma Ahenkuro Atuoni palace when there was a grand durbar of Nananom to honour some important personalities with the highest Suma State Adinkrah Sword Award, culture was at its best, and drums sang the praises of the awardees.

Either the awardees who were invited by the Traditional Chiefs for footing a Private Members Bill in Ghana's Parliament to criminalize the activities of LGBTQI+ people understood the message relayed by the drummers or not, they were visibly seen in enjoyment mood nodding their heads to the beats.

In the cover picture is Odeneho Dr. Afram Berempong III and other Bono Chiefs at a durbar to confer the Adinkrah Sword Award on eight parliamentarians, with Hon. Sam Nartey George at their lead.