Rapper Lil' Nas X has revealed that he is expecting a child — his album — later this month. The rapper also released a series of announcement photographs that show him with a huge baby bump!

The 'Old Town Road' rapper posted the breathtaking photos to Instagram, where he is shirtless and kneeling poolside, flaunting his massive bulging tummy.

This is a must-see!

Of course, he is referring to his upcoming album — but the pictures look as real as they come! In the snaps, LNX is decked out in a flowing white shirt, which is open in the front exposing his baby belly. It appears the rapper had a Hollywood professional attach a false pregnancy belly to his body — and the photos are amazing! 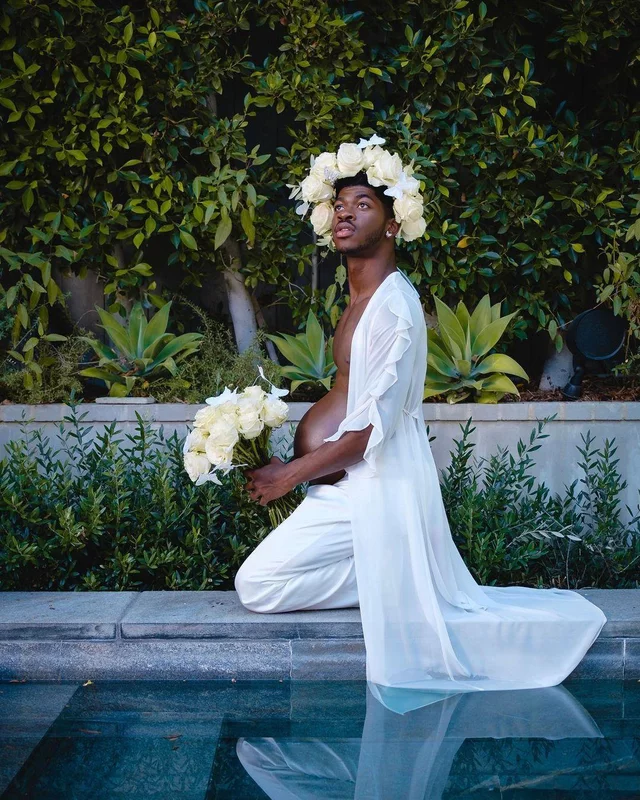 The rapper claims he came up with the idea after listening to Megan Thee Stallions’ verse on his new song ‘Dolla Sign Slime’ for the first time. “I was like, ‘Oh my God, this is amazing,’ so I immediately called my stylist,” he told People. Adding, “She was like, ‘Wow, this all comes together. Your album. Your baby.’ I was like, ‘Yeah, this is my baby, huh?’ As a joke, she was like, ‘Yeah, you should do a pregnancy shoot.'”

So now we're getting ready to release the whole thing, and it's going to be incredible.” The ‘Old Town Road' rapper is releasing a new album!

According to the rapper, the new album was mostly written during the COVID-19 lockdown last year.

LNX mentioned on Twitter that making new songs is "therapeutic" for him.

“I've changed in several ways, including how I handle a lot of situations, how I deal with sadness and anger, and simply realizing that I don't have to react to emotions in specific ways.

He stated, "I've learned to let people's remarks slide off my back."

Fans are understandably thrilled to hear the rapper's new music, and it appears as he will deliver with a combination of diverse types of music and a "wonderful balance" of "genuine" music and chart-topping singles.

“You're getting a lot of details about my past and where I want to go in my romantic life.

They are, nevertheless, a bop.

“I think I've finally discovered a good balance between being as authentic as possible in my music and writing a smash song,” he told the publication.

Scroll Down To See More Photos! As previously reported, Lil' Nas X is coming off of yet another contentious release following the backlash he received for his Nike "Satan Shoes."

As previously reported, the rapper released a Nike sneaker with a pentagram design with a real drop of blood from any firm employee.

Nike filed a lawsuit against the manufacturer, but that's an other tale. In the end, everyone is looking forward to the new album...and the new baby?!

Content created and supplied by: Insyde (via Opera News )