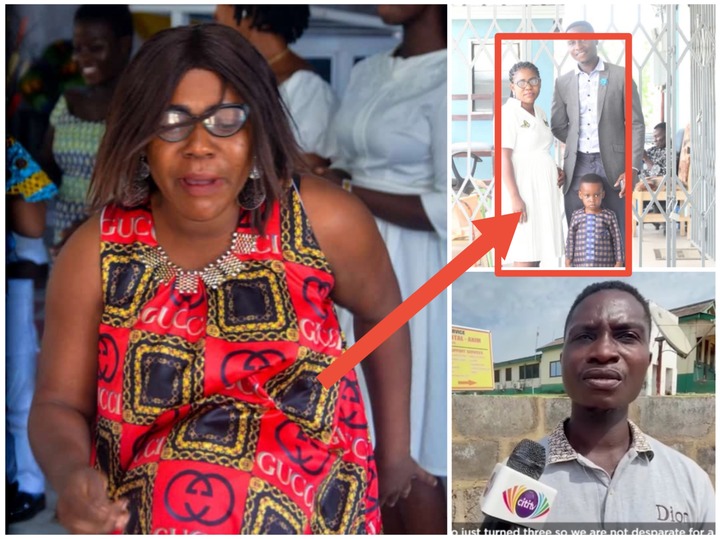 The pot of lies that were told by Josephine Panyin Simson about her pregnancy had burst. In her confession to the investigative team of the Police, Josephine disclosed that her pregnancy was meant to impress her husband. But there is more to it.

According to her [as gathered on interviews taken on Takoradi-based Empire FM], she lost her pregnancy just after her first trimester [thus in her four months of the pregnancy] but feared how the husband would treat it when the news is broken to him. She is reported to have informed the mother about the lost pregnancy, and the two secretly devised a plan to pretend the pregnancy was intact, not only to the husband but to neighbors and friends who might 'curse' her over the failed pregnancy.

In her desperation, she managed some savings and bought a silicone baby bump and wore it throughout the remaining trimester. The husband never suspected her nor the mother.

However, after the lost pregnancy, Josephine denied her husband sex [that is five solid months] under a pretext that doctors had advised her against it because the pregnancy had issues. She managed to procure some medications for pregnant women but the husband never enquired to know how religious she took them. Neither was he interested to learn about the antenatal clinics she attended afterward. It was just in her final month that she requested to move and live with her mother, Agnes Essel.

The crude plan about her abduction was hatched at the mother's home. The husband, Michael Simson a mobile money operator had no clue of the plot.

The motive as harbored by the wife and the mother was to fake a kidnap and get released later to announce she lost the child to kidnappers.

The conspiracy was so evil that the emotions that run after it made people curse authorities who doubted it or presented evidence to challenge it. Currently, the mother and Josephine have been detained.

The husband is seriously traumatized and in disbelief of what he had learned. A plea to pardon the husband has been made by Josephine but as to the police granting that is yet to be known.

The Law Will Not Spare You: Spreading Of False Information Lands Shatta's Two Friends In Trouble.