EXCLUSIVE: Why Prison Break Is Better Than Money Heist Part 1. 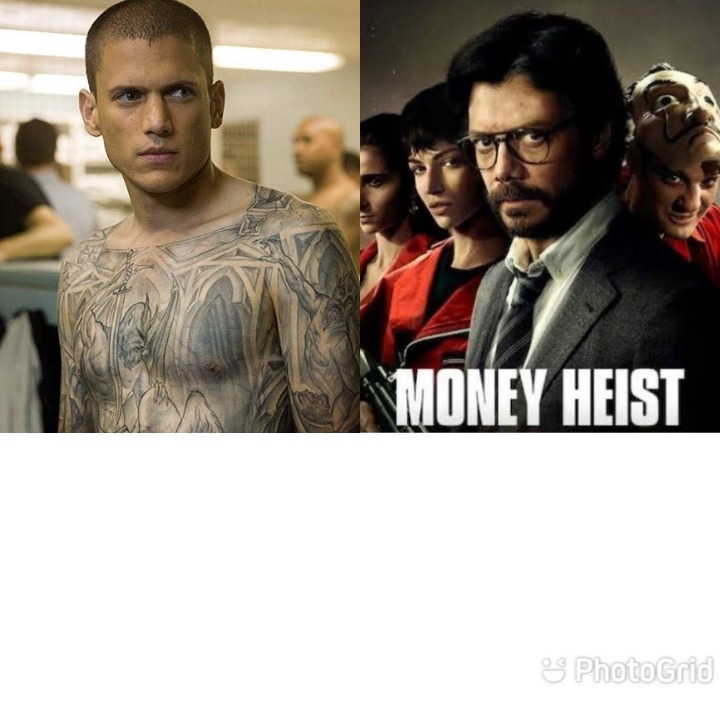 I have always come across alot of debates about which series is better than the other between prison break and money heists.

For me I think it's only those who have never watched even up to a single episode of prison break will be comparing this two series. If you have taken your time to watch even just season one alone, you will testify that it is better than the whole full seasons of money heists.

Let's take a look at my reasons for saying this.

The love he has for his brother is intense; sacrificing life as he knew it and going to jail so he could bust his brother out. But the Professor? Hired a group of baddies (his own brother included) to rob the Royal Mint and couldn’t even go down the rabbit hole with them.

When it comes to who is smarter between the two, I really can’t tell. I do think that Michael is more composed when confronted with a problem and is able to come up with a good alternative.

However, when something doesn’t go according to the Professor’s plan, he becomes sloppy and looks like he’s lost all his money. He doesn’t do well under pressure and this nearly cost him in seasons 2 and 4.

The Prison Break gang was truly a family. Remember Sucre? That character was the literal meaning of ride or die, especially when he was thrown into Sona after helping Michael and co escape from said prison and refused to give them up.

Even C-Note made a comeback in season 5 when Lincoln needed help getting to Yemen. And although Michael never liked T-Bag, he paid for his hand surgery and also united him with his son.

This isn’t the case with Money Heist. Most of the gang members aren’t team players and this shows.

If they had any real affection would they be pointing guns at each other every five minutes throughout the series? Or letting mercenaries loose just so they can regain power? Yes, I’m referring to Palermo here.

And don’t get me started on Tokyo; who is childish and rash and the reason for Moscow’s death in season 1. Can someone also explain to me why Rio is still in the series?

Who are the villains in Money Heist? Inspector Murillo? Who fell in love with the Professor, joined his gang, and is now called Lisbon? Or Arturo? That annoying character?

How about Alicia Sierra? Lowkey, I think she’ll be joining the gang in season 5, but that’s just my theory. Gandia isn’t any better villain, although he is certainly better than the 3 previously mentioned.

In all honesty, none of the Money Heist villains can compare to the villainous treachery of T-Bag, Alex Mahone, Agent Kellerman, and even Brad Bellick. And with these villains, we realized that not everything was as black and white as it seemed and eventually learned to love them.