The walk for Alan yesterday was very successful and one can accurately predict with all fairness that the people of Kumasi have spoken, and their vote and support are for Alan. This will be the conclusion for now until Dr. Bawumia's camp also organizes a walk for Dr. Bawumia in the same Ashanti Region. Until Bawumia's crowd beats Alan's, we have no choice but to conclude that Alan is leading in his home region, Ashanti Region. 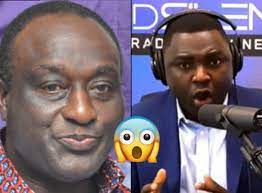 Aside from the tribalistic statements Alan Kyeremanten made at the walk, another scandal has emerged which has canceled out the successful nature of the walk. Delegates and those who came for Alan have complained of a low send-off taken given to them by the organizers of the walk. They complained that after walking effortlessly in the sun for Alan, they were just given 50 cedis. This was spotted in a viral video.

Kelvin Taylor has reacted to this and as expected, he capitalized on this to campaign against Alan and the New Patriotic Party. Kelvin Taylor refused to understand why NPP supporters will complain about just 50 cedis which is equivalent to just 6 dollars if really the country and economy are developed as projected by the leadership of the country and the party. Taylor stated emphatically that even with the organization of a walk, the NPP has failed so how can the NPP govern the country? Kelvin Taylor used that as a basis to warn Ghanaians to vote the NPP out of power in 2024.

"If the NPP has developed the country as their foolish leaders keep saying, why would some supporters of Alan Cash lament about getting 50 cedis which are less than 6 dollars after their walk in Kumasi? I have consistently told you that the leadership of this generation of the New Patriotic Party is 'nkwasiafour'. They have no idea to govern and thus regardless of whom they elect as flagbearer, they must be voted out of power in 2024"

What Business Akufo Addo Have With Music Concert? He Should Have Been The Busiest - Ama Pratt