By HumbleCheddar🤩 (self media writer) | 3 months ago 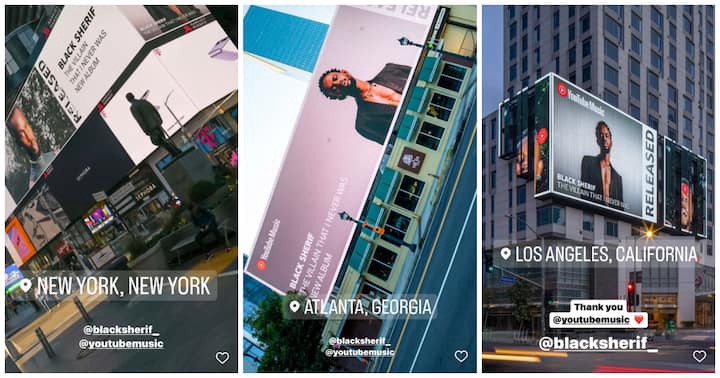 Photos of billboards in the United States featuring Ghana's Black Sherif, are making waves online The pictures have been seen so far from Los Angeles, California, New York, New York and Atlanta Georgia Ghanaians have been applauding the young superstar for the feat that is only one of many following the release of his debut album.

In photos that have surfaced on social media, the Ghanaian musician's photos and pictures of his new album were spotted around Los Angeles, California, New York, New York and Atlanta Georgia.

This is only one of the milestones Black Sherif's The Villian I Never Was album has chalked since its release on Thursday, October 6, 2022.

it has raked in more than 70 million views on the streaming and audio discovery platform, Audiomack.

The first album of the 2022 BET Hip Hop Awards nominee achieved the milestone in less than 24 hours after its release. A little over 24 hours after the release of the album, it also set a record on Apple Music UK albums chart. It peaked at number 9 on the chart.

Content created and supplied by: HumbleCheddar🤩 (via Opera News )