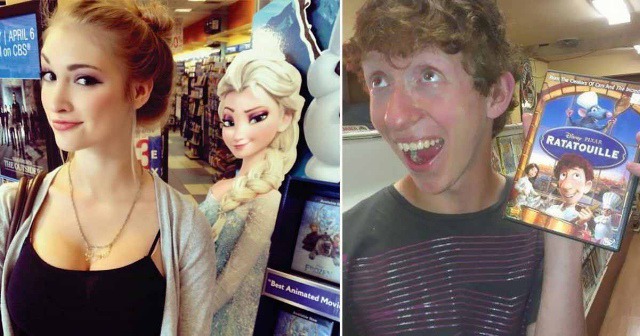 Looking like a cartoon, though, is something that far fewer people would be happy with. Nevertheless, it happens. We have a whole fifty people in this article who are dead ringers for animated characters. In some cases, we think they may even have been the inspiration for their cartoon copies!

There are thousands of little girls out there who dream of looking like a Disney princess. They even cosplay as the characters, and go on expensive vacations to Disneyland dressed exactly like the princesses they idolize.

It's far less likely that this man intentionally walks around looking just like Carl from 'Up,' but he's one of the best cartoon lookalikes we've ever seen. It's just a shame that the film is so sad; people probably burst into tears when they see him.

Being famous doesn't protect you from looking like a cartoon. Just ask pop star Joe Jonas. He's got his own look and style, and he's been very successful with it. Every time we see him, though, we can't help ourselves from singing 'A Whole New World.'

Jonas is a carbon copy of Aladdin. He's got the same eyes, and the same cheekbones. He could make the resemblance less obvious by changing his hairstyle. As he doesn't, we're guessing he likes it!

We're only three entries into this list, and we've already got two characters from the same movie! This time it's Russell from 'Up,' and it's intentional. This young man has embraced the role, right down to the costume.

We don't know if he's ever met up with the man who looks like Carl, but if that hasn't happened, someone needs to facilitate it immediately. Disney could make a live action version of the film. They're big on live-action remakes at the moment.

You won't find many men who deliberately try to resemble Butt-Head from 'Beavis and Butt-Head.' We suspect it's even less likely that you'll find women or girls who want to look like the character, but here's an exception.

Whether or not she naturally looks like Butt-Head, the expression she's making with her face tells us that she's doing it on purpose. We suppose if someone compares you to a famous character, you might as well embrace it. Good on her.

They say that all pet owners end up looking a little bit like their pets after a while. We haven't heard anyone say that you start looking like an animated character if you watch the film they're in too often, but we might have to start saying it now.

We suspect that this lookalike is just down to a case of bad timing in terms of when the picture was taken. The fact remains, though, that she really does look like Flash from 'Zootopia.'

If you're going to look like an animated character, there are far worse options out there than 'Brave' character Princess Merida. She's strong, she's fierce, and as the name of the movie suggests, she's brave.

Anybody with flaming red hair stands a chance of looking like Princess Merida, but the effect here is enhanced by the fact she wears her hair in curls. Factor in the eyes and the nose, and you've got a perfect match. Even the clothes are pretty similar!

'Ratatouille' is one of our all-time favorite movies. Whoever knew that a movie about rats invading a kitchen and messing around with all the food could be so cute? Also, who knew a character as cartoonish as Linguini could have a real-life counterpart?

This boy looks like he's stretching his face as much as possible to make the resemblance work, but it's definitely there. How far does the resemblance go? Does he have a pet rat as well?

Replicating the look of 'Baymax' star Hiro Hamada isn't too difficult. You can find the clothes in most department stores, and you can even buy a plush star to help you out. This kid is on the next level, though.

The hairstyle isn't just close to Hamada's, it's completely identical. He's been able to perfectly replicate the smile as well. Is 'Baymax' real? Is this actually Hiro Hamada? We're confused; this is like looking straight down the uncanny valley.

We know this isn't the most original comparison in the world. In fact, someone mentions it on almost every single episode of 'Family Feud.' There's a reason it gets referenced so frequently, though. Steve Harvey really does look exactly like Mr. Potato Head.

We're lucky that Harvey has such an excellent sense of humor. If he didn't, he'd probably have become really annoyed with the constant jokes by now. Instead, he laughs them off and fires back with a joke of his own. That's how to deal with it!

Some girls out there go to incredible lengths to look more like Elsa from 'Frozen.' Because of the success of the movie she stars in, she's become the most iconic Disney princess of the past few decades.

Very few of the girls who attempt to copy her get the resemblance as close as the one in this picture - and she's not even trying all that hard! Her hair isn't blonde, but the face is a perfect match. The arched eyebrow and the little smirk seal the deal.