United showbiz with Great Ampong, Piesie Esther, Francis Amo as guest and Mcbrown as the host.

By edemandyk (self meida writer) | 20 days 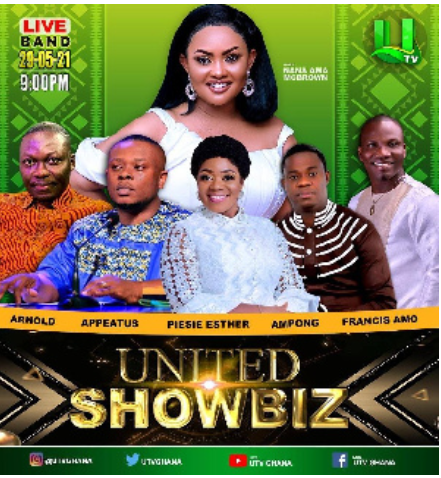 The guests spoke in turn about their journey to fame and stardom. It started from Piesie Esther. She has 6 albums to her credit for the 19 years she has spent in the music industry with 8 songs on each album. Piesie said she was brought up in a village where life was quite difficult but when she broke out to become successful she decided to appreciate God by looking good always. That's why she is a fashionista, she said.

Piesie Esther explained the difficulty when producing the first album that brought her to the limelight. We went to every producer we knew but none took the project on until my pastor "Apae live" decided to do it himself, luckily this was the album that ushered me into the limelight.

Francis Amo also added his story. Francis has 5 albums and 4 singles with 10 songs on a single album and the rest 7 songs per album. My first album wasn't a hit but my second album was what launched me into the limelight. I have never worked with any producer said, Francis. The first time I tried a fellow musician went to my producer to discourage him and that was the end of my work with producers.

Great Ampong also stated that he has been in the industry for 20 years with 16 albums to his name. According to him, it all started when Emmanuel Asare saw him perform at a program in national theater dabbed, 2000 Amens. He met me on Sunday and Wednesday we were at the studio recording.

My producer traveled abroad and I worked with Sir rack for some time who also died. I was advised by a fellow musician to start using my money for some demo. That was when I recorded the Hossana album with 15 songs. I linked up with Bandex and gave him my CD. I waited for three months with no reply until one day I went to meet him. I reminded him and that day he played my track, the next day he called me for us to record the songs and he chose 8 out of the 15 songs for the album.

The show was filled with music performed by these three household names. It was a Thanksgiving service to end the month. They also discussed some pertinent issues relating to the entertainment industry.

Why Are Christians Worshipping, And Praising Jesus, Is He God? - Pastor Chris Oyakhilome