Another Popular Ghanaian Actor In A Very Bad Condition.

By Kenichie (self media writer) | 2 years ago 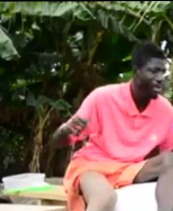 Not long ago, a Kumawood actor popularly known as scorpion was shot in his own house. Nobody knows why this was done except for those who were involved in that act. Longface, another popular Kumawood actor has been paralyzed by his colleague in the movie industry that is, according to him.

Several people have told him to pray very hard because what has happened to him isn't physical but spiritual. In his interview he said, apart from Kweku Manu, Sunsum and Boho Biom, none of the Kumawood actors have called to check up on him. Maybe be they've not heard about it or will do so later. He really needs help, he is suffering.

He went to Prestea, where he has been doing some one or two things and some school events for the Junior high school students who finished last year and this year to organize them together and award them. He said they were doing this just to help the younger ones who are about to write their Basic Education Certificate Examination (B.E.C.E.) to study hard and pass well. He even said that, it wouldn't end there and they will do the same next year for those who wrote their B.E.C.E this year. What a good work he is doing and still someone is allegedly trying to end his life.

He said after the event, he was called by someone to Mc at his wedding on Sunday in Kumasi. So he came to Kumasi on Thursday, and he had another call about a friend's birthday party which will take place before the wedding date. Because he was good at mcing, he was forced to do it because, the one who was mcing at that time wasn't making the thing interesting.

Longface says, he didn't even do it for 2 minutes and broke down instantly, people at the party thought he didn't want to do it that is why he is behaving like that. They sent him to a place to rest for while and saw that his leg was swelling gradually. He said he was strong and didn't twist his leg or hit his leg against anything, it just happened at once.

He was later told by several people that, what he is facing is spiritual and someone in the industry is doing this to him according to his research. He said he even felt it within himself that what is he going is through is not physical. In his whole life, he has not experienced anything like this, he has heard about juju in the movie industry and now he has seen that, it exists.

According to him he has not had a problem with anyone or visited any shrine or got involved in any juju but still someone is doing this to him. In the interview he said he has been told who the person is and he is begging him or her to leave him alone.

He said he has been in the movie industry for almost for 15 years but now he has seen that juju, hatred and jealousy exists in the movie industry. He is telling everyone to pray very hard and let the word of God take the lead in whatever they do. Please try and pray for him too because he is going through pain.

Content created and supplied by: Kenichie (via Opera News )