Please I thank all my readers for supporting JUKELAFRICA by dropping your comments and liking articles . Please do not hesitate to click on the +follow button to receive more exciting articles on daily basis. Cheers ! Readers can recall how Coded of 4x4 explained on CTV why he now performs on a solo project . In that interview, he did not want to tarnish the group in any way . During that interview, Coded provided details of how Shatta Wale's frequent hit tracks pushed the group to work on solo projects but many Ghanaians did not believe his explanation. On United Showbiz, Nikki Samonas raised the same question of why he was working on a solo project and he tried bringing that same excuse but was stopped by Bulldog and Aplus who told him that he was at loggerheads with the team . Coded initially objected to the revelations emanating from Aplus and Bulldog but when he was pushed further , he confessed that he did not know why Captain Planet had blocked him on whatsap, Instagram and all other networks . When he was asked why he has not exercised the option of visiting Captain at his home , he said Captain was a grown adult who should be allowed to make decisions without any undue influence and he would not apologise for what he does not know. All panel members were not impressed with the answers provided by Coded and so he was asked to speak the truth since there was evidence on social media signalling Captain Planet's displeasure about the utterance of Coded . 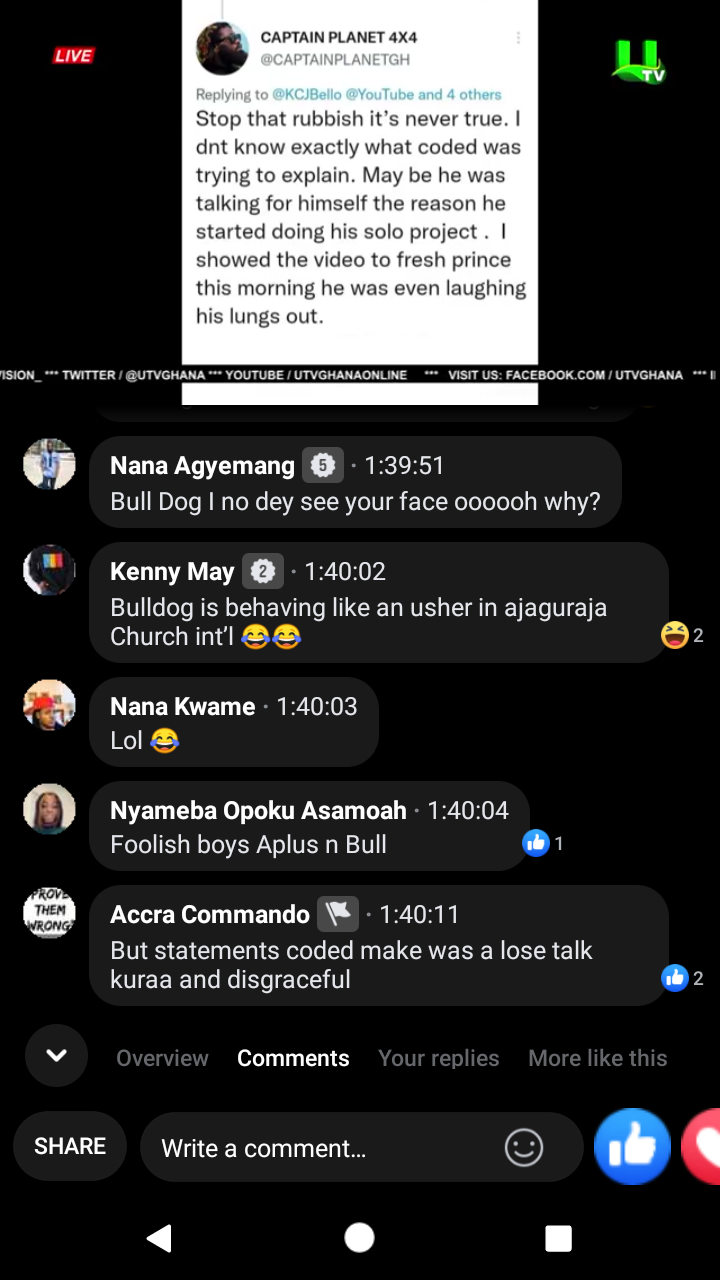 A serial texter sent a message to the hostess during the show to reveal how Captain Planet was the laziest member of the 4x4 music group. The texter also added that it was Coded who decided to go on a solo project after he attended Captain Planet's wedding late even though he was the best man for the event . According to the serial texter , Captain Planet had to use Fresh Prince as his best man due to how dissapointed he became.

When Nikki Samonas read the text , Coded admitted that even though he attended both the traditional and white weddings , he did not know why he got there late . He apologised to Captain Planet about what he did but failed to explain the reason for his lateness.

The panel members on the show were not impressed with the lackadaisical manner by which coded provided information and they expressed their dissatisfaction about his apology . They advised him to be truthful to himself to visit Captain Planet and offer a more sincere apology.

Logik said it was inappropriate for Coded to attend such an event out of time knowing very well that he was the best man of his very good friend . He said Coded did not do the right thing to have treated Captain unfairly even though Captain had been his best man when Coded was wedding his wife .

Do you think Coded was right to offer an apology on live TV instead of visiting his brother?

Who do you think was the cause of the 'split' of the 4x4 music group ?

Do you think Coded is hiding some secrets from Ghanaians concerning how he and his friends are now doing solo projects?

Kindly drop your thoughts on the foregoing discussions?

Petrol and LPG Prices May Fall by about 7% per Litre.