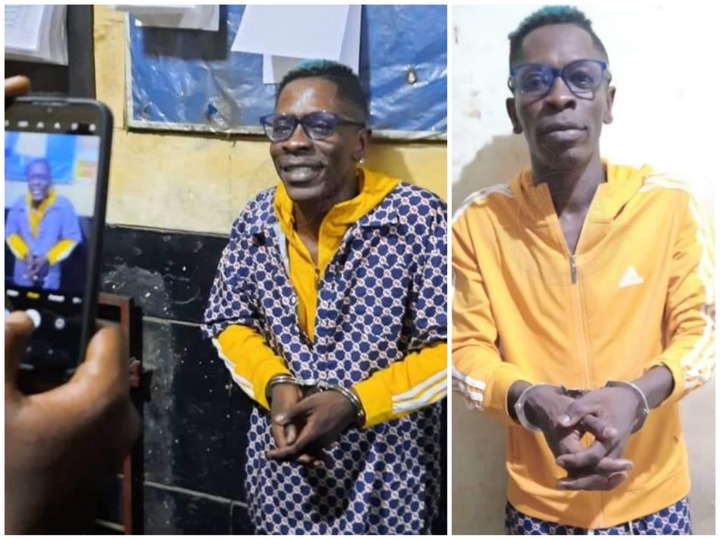 On several occasions, Shatta Wale has proven to be a strong artiste, one who understands that systems must work. In fact his arrest by the police was triggered by himself when he asked the state security agency to detain him shortly aster the arrest of Prophet Ahuofe, the man who prophesied that he will be short by some armed robbers on Monday.

Even in handcuffs, Shatta Wale makes the jovial expression on his face as though nothing serious is at play. He smiled at the camera as someone takes a photo of him right at the Police station.

In just a quarter of an hour when news broke a out his arrest, Shatta Wale had become a trendy subject, with interesting analysitics increasing exponentially to what was recorded when the robbery attack prank was published.

For those critics who felt the dancehall artiste will never submit to the police for being accused of publishing false information and causing fear and panic, his disposition is simply a sharp message to thrash their argument. He has proven that the arrest made on him is least of his woes, as he appears to know of the consequences of his prank.

According to the Police, Shatta Wale turned himself in for arrest, and this is one of the very acts we hardly see in Ghana. He surely has a better appreciation of the law and due process.

This could get him to be pardoned for his offence as he shortly after a police enquiry about his whereabouts, came out to explain what he was up to. Though he never anticipated tsuch an outcome, his arrest could turn up to be a big game in his journey of fame.

Known to be very creative in turning bad publicity to gunner some popularity, Shatta Wale may come out with some heavy punchlines in one his singles soon. He has been commended by renowned legal practitioner Maurice Ampaw for having tested the responsiveness and intelligence of the police to these crimes.

Paul Adom-Otchere of Metro TV had even interceded for him, praying that the IGP never presses any charges against him. But will that be the case?